The new single arrives after Juice WRLD made Billboard history by becoming the first artist to have five songs debut in the top ten on the singles chart.

To give fans the late rapper’s first posthumous album with Legends Never Die, Juice WRLD’s legacy received a new chapter this year after his estate and labeled worked together.

Selling over 497,000 units in its first week, the album was sought well by fans, and landed the No. 1 position on the Billboard albums chart. Juice WRLD’s reign would continue atop the charts thanks to as second well-performing week.

The late rapper’s team came through with a dream collaboration Juice WRLD hoped to fulfill in his career after promises of another posthumous Juice waiting to be fulfilled.

Back in late 2019, Juice WRLD sent out a tweet expressing his desire to work with The Weeknd on what would be a smash hit saying, “me and The Weeknd would make a diamond record.” While the record never came to fruition before Juice WRLD’s untimely death, the record finally came to live nearly nine months after his passing as The Weeknd lends his vocals for their “Smile” collaboration.

The new single arrives after Juice WRLD made Billboard history by becoming the first artist to have five songs debut in the top ten on the singles chart. Shortly after Legends Never Die released, Lil Bibby, who works on the board of Juice WRLD’s label confirmed more content from Juice WRLD would be released in the future. “I don’t think the albums are gonna stop,” he said. “It’s plenty of music. So, yeah.”

Maviii Rides Up the Charts With New EP The Drive 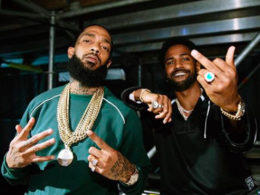 Sean also took to Instagram, ahead of “Deep Reverence” and his album announcement,  to offer up some advice on how he’s been able to stay level headed.
byBien Luigi

Often drawing beats from YouTube producers, Stoehr mixed and mastered the 14-track project all on his own. And his music is demonstration of his tenacity.
byVictoria Johnson

“I’m on a one way track, I’m living on faith, gonna get me some of what’s out…
byAshly E. Smith