Randy Moss is back, and this time he’s wearing the burgundy and gold.

Yesterday it was reported that Randy Moss had a workout with the San Francisco 49ers and it was said that he had an excellent workout, even with coach Jim Harbaugh having to throw him passes since none of the Quarterbacks were able to do so because of an NFL rule barring them from doing so until after the League year starts.

Now we know for certain that Moss wowed those present at his workout because the 49ers has signed Moss to a one year deal only a few hours after his tryout.

And in signing Moss, San Fran may have fixed one of their glaring weaknesses that they had last year, even though the team finished 13-3 last season.

In the 2011 NFC championship game, San Francisco 49ers quarterback Alex Smith threw nine passes to his receivers and only one pass was completed to Michael Crabtree for 3 yards. To his tight ends and running backs, Smith went 11-of-17 for 193 yards and two touchdowns.

Moss didn’t play at all in 2011 after a dismal 2010 season in which he played for three different teams (the New England Patriots, Minnesota Vikings and Tennessee Titans) and caught just 28 passes for 393 yards and five touchdowns.

Even with his most recent history, it is still said that Moss can step in and contribute…and he still has his 4.4 speed.

Is "Homeless Hotspots" Ad Campaign Brilliant Marketing or Dehumanizing to its Participants?

As sports fans, we’re all longing for the day when we can return to some kind of normality, and sporting events will be splashed across our TV screens once again.
byTUT Staff 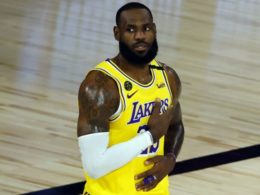 LeBron James Will Miss Thursday’s Game Against The Rockets

James is apparently struggling with groin soreness, something Lakers head coach Frank Vogel mentioned after the loss to the Thunder.
byBien Luigi

How to Prepare for the 2020 Monaco Grand Prix

The 2020 Monaco Grand Prix looks to be an incredibly exciting event for F1 fans, but if you want to make the most of your trip, you’ll need to come up with a plan in advance.
byTUT Staff