This was obviously done in poor taste. Pun intended.

Watkinsville, Georgia restaurant Chops & Hops came under fire this weekend after saying that its  “Black & Bleu” sandwich was inspired by Chris Brown’s infamous and tragic 2009 assault on then-girlfriend Rihanna.

The restaurant tweeted a photo of the sandwich along with the message: “@chrisbrown, @rihanna and us teamed up for a award winning celebrity sandwich.”

It continued, “Chris Brown won’t beat you up for eating this unless your name starts with a R and ends with A.”

The tweets have since been deleted.

After receiving much criticism for their insensitivity, the restaurant removed the item from their menu and apologized via a statement on its Facebook page.

The owners of C&H would like to make sure everyone knows that we and our staff DO NOT SUPPORT DOMESTIC VIOLENCE. Many of us have been affected by domestic violence in some manner and realize that this is no joke. We have been involved in fundraising for Project Safe Team 6 and we fully intend on donating proceeds (times 6 – in honor of Team 6) from the sales of the burger. C&H continues to strive for a community driven, family oriented, great food and great service environment. We will continue to be involved in our community fundraising and charities near and dear to our hearts. Mychell Lang

This was obviously a poor decision on the restaurant’s part and it’s nice of them to recognize that and move on.

Dinner Theatrics with a Twist: The Murder Mystery Comapny

If you've grown tired of the typical “dinner and a movie” date, look no further! Opt for a new dining and theatrical experience with The Murder Mystery Company!
byAshly E. Smith 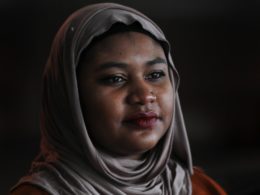 Black Muslims are often overlooked in conversations about Islam, and Afro-Arabs are rendered invisible in even the academic discourse about Arab politics and culture.
byBien Luigi

Looks like a part of Murrica wasn't too proud of J. Lo and Shakira’s Super Bowl halftime show.
byBien Luigi

“The people that are doing this are not Minneapolis residents,” Mayor Jacob Frey said.
byBien Luigi