Children of Mother who Drove into The Ocean: Mom Tried To Kill Us

Children of a mother who drove into the ocean accused their mom of being crazy after she tried to kill them according to the story filed by the detectives.

A pregnant South Carolina woman pointed to the ocean, locked the doors and rolled up the windows, telling her three children she was “trying to take them to a better place” as she drove her minivan into the surf, authorities said.

Ebony Wilkerson even tried to stop bystanders trying to rescue her screaming children from the water, saying “everyone was OK” as she left the van in the ocean, an affidavit said. Wilkerson, 32, is charged with three counts of attempted murder and three counts of child abuse causing great bodily harm. She was scheduled to make a court appearance yesterday.

The children two girls and a boy, ages 3, 9 and 10 were pulled through the windows to safety Tuesday on Daytona Beach by bystanders and beach safety officers.

Wilkerson denied the charges telling investigators the waves pulled her in when she was driving too close to the ocean as per the affidavit.

Ben Johnson, Volusia County Sheriff, said Wilkerson, of North Charleston, was in the custody of the sheriff’s office after being hospitalized for a mental evaluation.

Authorities learnt from the children that they had come to Florida from South Carolina earlier in the week run away from their father. They described a history of violence between their parents, and said their mother had been “acting crazy and speaking to Jesus” since they had come to stay with Wilkerson’s sister in Daytona Beach

The sister, Jessica Harrell, didn’t return a phone call from The Associated Press, but she was worried about Wilkerson’s mental health and called a 911 dispatcher hours before the minivan ended up in the ocean.

According to the affidavit When she was asked by one of her children what she was doing when driving into the ocean she said:”‘I am keeping us all safe.'”The boy tried to wrestle the steering wheel away from Wilkerson the report said.

“She told them to close their eyes and go to sleep. She was trying to take them to a better place”, Johnson said at a news conference.

One of the children lowered the windows and the siblings yelled for help, attracting the bystanders and when one bystander Stacy Robinson attempted to intervene the mum said “I’ve got to do this”.

Tim Tesseneer who was one of the rescuers said Wilkerson’s eyes were wide open and she looked “possessed” as she tried to prevent a beach safety officer from entering the vehicle to rescue the toddler who was the last to be removed from the minivan, he told detectives. The children are with the Department of Children and Families.

Two days before what happened on the beach, Wilkerson told North Charleston police that she was in a violent fight with her husband of 14 years at a hotel room in Myrtle Beach and had gone to a hospital for treatment, according to an incident report. She also told police that after she packed up the car and kids at their apartment, her husband made a motion as if he was going to grab her, but she got into the car before he could, the report said.

She then went to Wal-Mart to cash in some coins so she’d have money for the trip. She reported that she felt a man was staring at her and followed her at the store and to the North Charleston City Hall where police were called. Officers said they gave her a form for a protective order. She refused being taken to a shelter since she was going to Florida.

Myrtle Beach police say they are investigating what happened at the hotel but no charges were filed. Phone numbers for Wilkerson’s husband were disconnected.

Her sister told the 911 dispatcher she had tried to take Wilkerson to a hospital the day before the minivan ended up in the surf but Wilkerson checked herself out. She said Wilkerson had been abused by her husband and that police should check on her.

“She’s getting a little bit better, but she’s still not all there” Harrell said

Harrell told the dispatcher that Wilkerson was “talking about Jesus and how there are demons in my house and how I’m trying to control her but I’m trying to keep them safe.”

Harrell said she had taken Wilkerson’s car keys from her but her sister had found another set and driven off with the children.
After the call to dispatch, Daytona Beach officers stopped Wilkerson’s black Honda Odyssey and she expressed fear that her husband would be coming to Florida to harm her and her children. The children were sitting quietly, smiling, and showed no signs of distress according to the police report but the Mom was suffering from some form of mental illness.

Jourdan Dunn: There Is Nothing to Celebrate About Having one Ethnic Model 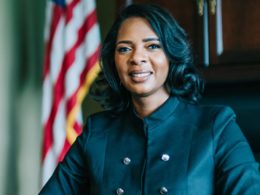 Regardless to what the attorneys will argue to get Holmes removed, they’re heading to court next week.
byBien Luigi
Read More

Bobbi Kristina to Get All Of Whitney’s Possessions?

The late diva Whitney Houston is rumoured to have left all her possessions to her 19 year old daughter Bobbi Kristina. The Will does not specify the amount of money the pop star left behind, but Bobbi Kristina is the only beneficiary mentioned in the Will.
byBernadette Otieno