Liam Hemsworth, who? Looks like Miley Cyrus has found herself a new beau!

Liam Hemsworth, who? Looks like Miley Cyrus has found herself a new beau!

The “Wrecking Ball” singer and “Stuck in Love” actor, both 21, were caught making out in front of a crowd of college football fans at the USC vs. Berkeley football game at the L.A. Memorial Coliseum.

An E! News witness revealed that “…they were very flirtatious and [looked] like a couple…she was gregarious and was talking to his friends too which was nice to see because she didn’t seem stuck up.”

Another witness took note that the two couldn’t keep their hands off each other. “They were very touchy [and] held hands all down the Coliseum steps.” Despite the rumors, these two continue to insist that they’re not officially together, and that they are just really good friends.

It’s obvious that they’re very fond of each other, though. On Halloween they were spotted spending some alone time with one another at Schwarzenegger’s Los Angeles apartment. Later that night, the twosome headed to Universal Studios Hollywood’s Halloween Horror Nights, where they rode some of the theme park rides and went through the mazes. However, there was no PDA between the pair.

Both Miley and Patrick have been quite mum about their budding romance. As a source tells E! News “They don’t have a title…they are having so much fun together that friends don’t know at certain times if they are a couple or best friends.”

Regardless of the foggy status of their relationship, Schwarzenegger and Cyrus have been friends for a very long time. He even admitted to having a bit of a crush on Miley back in 2011. In his Details interview he told the magazine, “My eye, though, is set on Miley.”

Allegedly the pair went on a few dates back then, but nothing came of it as Cyrus reconciled with now ex-fiance Liam Hemsworth, and Schwarzenegger with an old girlfriend.

Looks like Patrick just got a second chance at romance.

It looks like Fish Mooney's time may literally be up on "Gotham". Could she soon be sleeping with the fishes?
byBrennen Jones 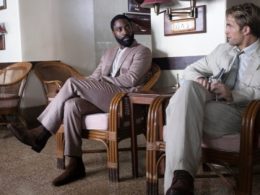 It’s possible the studio’s posture on drive-in theaters could soften in the coming weeks and that the film could screen on outdoor venues, even where indoor theaters are closed.
byBien Luigi

Ralphie May’s untimely death from cardiac arrest came just 48 hours after the comedian was awarded the title of Casino Comedian of the Year at the Global Gaming Expo.
byMelony Hill