Subway ex-spokesman Jared Fogle was sentenced Thursday to 15 years after pleading guilty to charges involving sex with a minor and child pornography.

Four months ago Jared Fogle, 38, best known for being a spokesman for Subway, was arrested in connection with a child pornography case.

On November 19, 2015, Judge Tanya Walton Pratt sentenced Folge to 15 years and eight months in prison. He will have to serve at least 85 percent of his sentence before being eligible for parole. The sentencing took place in an Indianapolis court after Folge plead guilty to child pornography charges including one count of traveling to engage in illicit sexual conduct with a minor as well as the distribution of child pornography.

During the sentencing, forensic psychiatrist Dr. John Bradford spoke to the court through video conference to talk more about pedophilia and Jared Fogle. He discussed what he called “mild pedophilia” and applied this term to Fogle saying “[Jared had] mild or infrequent fantasies about pre-pubertal children.” He also suggested that a possible treatment could be counseling along with a serotonin inhibitor or antidepressant.

Fogle is alleged to have had sex with a 16-year-old and a 17-year-old but only admitted to traveling to pay for sex with a minor on two separate occasions. He also had fantasies about younger minors around 12 years old and 13 years old but denies ever touching a child.

Dr. Bradford also expressed his concern that Fogle’s weight loss might have played a role in his pedophilia saying, “Once he lost weight, it seemed as though in a short time he had hyper-sexuality. There are brain disorders that can be associated with sexual drive.”

Dr. Bradford when on to say “Looking at all of this, I believe he did suffer from pedophilia, except it didn’t involve acting out with a child. he denies he ever touched a child.”

When asked about Fogle’s alleged sexual relationship with the 16-year-old and 17-year-old minors, Dr. Bradford replied, “[They] are not pre-pubertal children.”

Jared Fogle also made a statement to the judge before his sentence was handed down. “For most of my adult life, I’ve been in the spotlight trying to be a role model,” he started. “I became dependent on alcohol, pornography and prostitutes. Not a day will go by when I don’t think about what I did to [the victims]. Members of my family are also victims of my acts.”

Fogle’s conditions for release, after he has served time in prison, include not viewing pornography and having supervised visitation with his children. He has two children of his own under the age of five, but no evidence was found that he sexual abused his own children. Many members of his family were in the courtroom to support him at his sentencing.

The arrest shocked the nation who had come to known Jared Fogle as the stand-up guy who defeated obesity and lost 245 pounds by eating at Subway. Fogle became not just the spokesperson for Subway but practically the face of the brand. Fogle was beginning to work once again with the sandwich company until the arrest happened. Subway has since dropped Jared Fogle and has no connection to the child pornography case.

Rolling Stone Cover of Tsarnaev bombs with the public 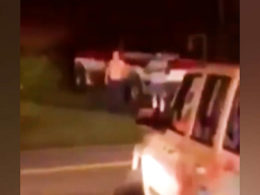 A video shows one of the protesters, who says he’s been shot, bleeding from the face as he climbs into a car.v
byBien Luigi