Mark Shapiro, the chief content officer of WME IMG (the company that owns the Miss Universe Organization), told the Jim Rome Show that he’d love to have the Family Feud host back next year.

Mark Shapiro, the chief content officer of WME IMG (the company that owns the Miss Universe Organization), told the Jim Rome Show that he’d love to have the Family Feud host back next year.

Steve Harvey made a big mistake when he announced Miss Colombia Ariadna Gutierrez as the winner before giving the crown to rightful Queen, Miss Philippines Pia Alonzo Wurtzbach during the live Miss Universe telecast on Sunday, December 20. Harvey also incorrectly spelled the names of Miss Colombia and Miss Philippines in an apologetic tweet.

The Internet rolled up its collective sleeves to make Harvey comedic fodder in the form of endless memes and gifs of the now-infamous mishap. But no rebuke was as ugly (or telling) as the ones that came in a series of tweets calling the Family Feud host and longtime comedian a “n*gger” for crowning then crowning then apologizing to “Columbia.” 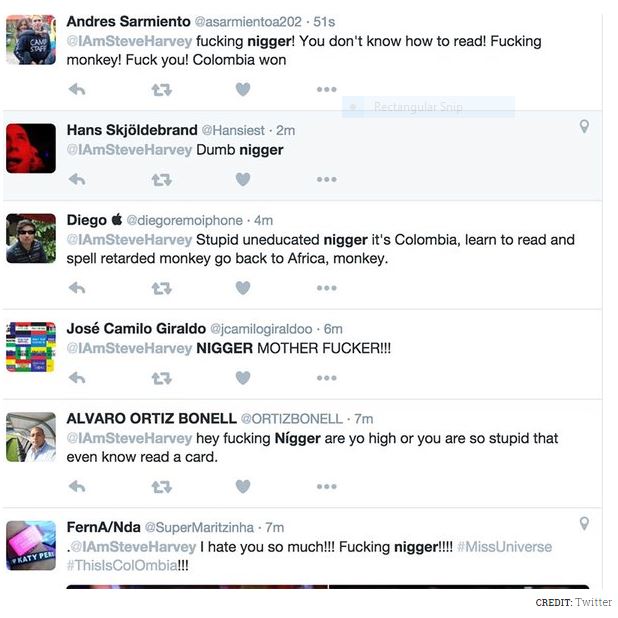 “The world forgives, the world forgets,” Shapiro added. “It could happen to the best of us. He was so well intended, and he’s such a good guy, and it was really such a mistake that I hope people don’t hold this over him other than for just a good laugh and let it pass.”

China is calling the coverage of how they've been treating Blacks in their country during the zcoronavirus pandemic, "sensationalized".
byBien Luigi

"I just always would catch myself going over his music in my head."
byVictoria Johnson