DMC was in the place to be as he dropped by the 4th Annual Black Comic Book Festival on Saturday (Jan. 16) at the Schomburg Center for Research in Black Culture.

Roughly 5,000 people piled into the Harlem museum and library to celebrate black comic books including the rap pioneer as workshops, film screenings and exhibits took place throughout the day.

“Somebody told me about this wonderful event that was going on so I had to come and see for myself,” he told The Urban Twist. “I don’t know what to do with myself. All this great artistic energy up in here. I’m loving it right now.”

DMC, who’s set to receive the first rap Lifetime Achievement Award at the Grammys this year, also recently started a comic book label, Darryl Makes Comics — and he is certain that he’ll be a part of the festival next year. But this year, he and his comic book collaborator decided “to come and be fans and participate.”

The 51-year-old icon also gave his origin story about how comic books gave him a first boost into the hip-hop industry. “Before hip-hop, I was a comic book head, that’s all I did. What got me into hip-hop was me and my brother, we had a little problem. Once hip-hop came over the bridge and everyone was buying turntables, me and my brother had a problem because we didn’t sell weed so we didn’t have no money. We had a huge collection of comic books so we did a comic book sale. We bought two turntables and that’s the thing that really got me writing. But before that, all I did was eat, sleep and live comic books.”

Black nerds, or blerds, are nothing new. But as discussions on bringing people of color into mainstream entertainment and Marvel’s Black Panther underway, the group is slowly being pushed to the forefront alongside other nerd communities.

“Being a person that’s black from the hood who’s into hip-hop and comic books is not a new thing. The problem was it was like it was underground,” said DMC. “It’s a positive thing that’s going on now.”

“You know, the reason we created Darryl Makes Comic Books is to showcase artists, writers, pencilers and inkers of color. Even more important, females. A lot of black females is gifted,” he said. “It’s like crazy being here. It’s an honor.”

The rhymer also pointed out that he was born right across the street from the Schomburg Center at Harlem Hospital. “All of this is like destiny,” he said.

Growing older is something that many of continue to be apprehensive about. Although we understand that it is…
byAshly E. Smith

In an effort to contact the King of Wakanda, a fan took an unusual route to garner the attention of the star.
byH. Sylver 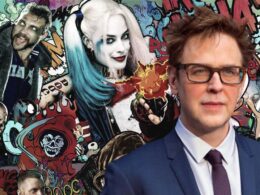 James Gunn Teases On The Suicide Squad — Many Characters Would Die

He answers a fan tweet “What two characters do you think are most likely to survive #TheSuicideSquad?” and he gave a grisly response.
byBien Luigi