Let Me give you an idea what some "good WHITE citizens" think of what has transpired as a result of a young Black man dying in police custody.

I just cried for over a hour after hearing Maryland State Attorney, Marilyn Mosby speak on her decision to drop the charges against the remaining three officers in the death of Freddie Gray. Mosby, silenced by a gag order for almost a year as these trials have take place, spoke passionately about the hardship she has faced during the trials. Then the hate filled racist comments started flooding the internet.

Mosby accused officers on the Baltimore City Police force of lying and changing paperwork after charges were filed. She accused Baltimore City officers of not only obstructing the interrogation her office launched but also, of launching their own counter investigation. Mosby outlined the trouble in having police investigating police.

“It has become clear that without being able to work with an independent investigatory agency from the very start, without having a say in the election of whether cases proceed in front of a judge or jury, without communal oversight of police in this community, without substantive reforms to the current criminal justice system, we could try this case 100 times and cases just like it and we would still end up with the same result.” -Marilyn Mosby

After the first officer, William Porter’s, trial ended in a hung jury the next three officers opted to take a bench trial instead. Porter was scheduled to be retried but now has been spared prosecution. Officers Edward Nero, Caesar Goodson and Lt. Brian Rice all chose to have their cases heard by Judge Barry Williams who concluded that the state did not meet their burden of proof in all 3 cases.

In light of the fact that the remaining officers would more than likely choose the same route and be acquitted by the same judge the States Attorney office felt it best to drop the charges against them. In her explanation of why she was dropping the charges Mosby explained that she wanted to ease not only the financial burden but the divisiveness that the continuation of these obviously fruitless trials would bring to the Baltimore City community.

Mosby did not defer to those who felt that she should not have taken the officers to trial in the first place. In contrast the fiery attorney stated “We stand by our decisions and charges. We stand by the medical examiners determination that Freddie Gray’s death was a HOMICIDE..” Mosby also spoke on the validity of the charges filed saying “They were affirmed when Judge Barry Williams, who rejected 13 motions for dismissal and denied 22 motions for acquittal.” The prosecutor also made it a point to correct those who have accused her of being anti-police “For those that believe I am anti-police, I am not, I am anti-police brutality,” she asserted during the afternoon press conference.

When she finished speaking I had been crying for almost 20 minutes. I cried about 45 minutes more as I thought of my own teenage son, my own father who works second shift and catches the bus home alone at night. I cried for every woman who has called the police for help to see the man they loved now treated like an animal. I cried for every mother who wonders where her young Black son is and prays he is safe only to find out he has been assassinated by the police. I cried for myself, who suffers mental illness and at any given time could be not in my right state of mind and be killed by police with inadequate training. I cried for my race and I cried for humanity.

When My tears lessened some I went to Facebook to see what the public commentary on the surprise motions to dismiss was. I was even more disgusted by what I found than when I heard the motion to dismiss. The way some white people dismiss Black lives can be so depressing. As a Black woman in America I read 25+ times a day via social networks, racist, disparaging remarks.

Let Me give you an idea what some “good WHITE citizens” think of what has transpired as a result of a young Black man dying in police custody. 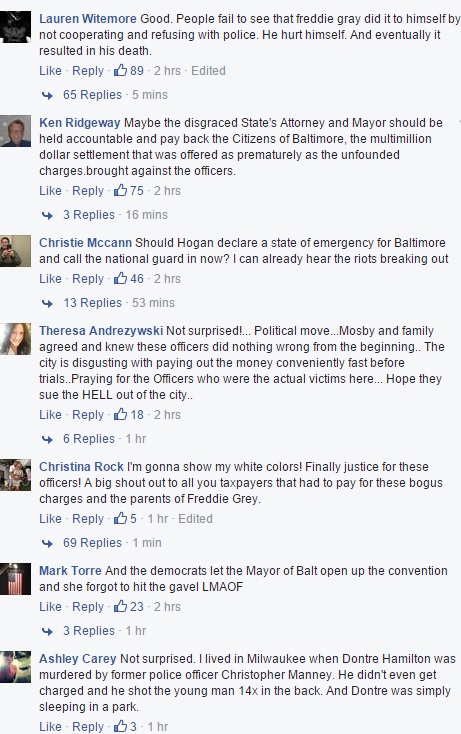 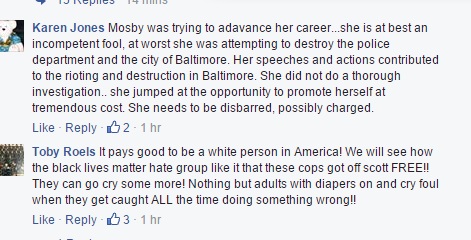 When you read these kinds of statements how can you not understand why the charges had to be filed. I dare you to do your own experiment. Look at any news post where a Black person is a victim and read the responses from “Good white people” many of them identifying as “Christian.” In fact I can make you understand in a quick sentence.

I guess just as Freddie Gray MURDERED himself these kids deserved to die for being Black. As many white people have said “Why were they even out at night having supervised fun?” It’s illegal to be Black and do anything didn’t you know? Don’t believe it? Ask Charles Kinsey who was shot by police unarmed, with his hands IN THE AIR while working. Or ask Alton Sterling who is dead for selling cd’s or Eric Garner who’s deadly crime involved selling loose cigarettes. Hey you could always ask Philando Castile, oh no you can’t he was shot by police while driving dow the street with his family.