On This Day In Black History We Celebrate the Conviction of Medgar Evers Killer and the 22nd Birthday of Trayvon Martin.

It’s February and historically this is when we celebrate Black History Month. There are some who were in an uproar earlier this week when Donald Trump called this month, National African American History Month. Critics say that Trump is trying to diminish the meaning and importance of Black History Month, but these people have been obviously under a rock for the last 15 plus years. Bill Clinton was the first president to dub February, National African American History Month back in 1996. Every president since has also referred to February as the same.

While Trump calling Black History Month, “National African American History Month,” is not the affront that people would like to make it (we were neither Black nor African Americans before they labeled us, what difference does it make now), what Mike Pence said, is. Vice President, Mike Pence, offended many people when he tweeted in remembrance of President Lincoln’s freeing the slaves to commemorate Black History Month. Really? Of all the accomplishments of the African race in America, that’s all he could come up with?

I digress. While there are people who would rather lament over Trump and Pence’s ignorance and lack of respect for what this month should represent, I won’t. I will spend My time doing what I do year-round, celebrating the richness and beauty of my culture. February 5th marks two important milestones in Black culture and history, the conviction of Byron De La Beckwith and the birth of Trayvon Martin.

Civil rights leader, Medgar Evers was murdered in Mississippi in front of his home as he stepped out of his car on June 12, 1963. His killer, Byron De La Beckwith was a local salesman and member of the White Citizen’s Council. The White Citizen council actively boycotted Black businesses, used scare tactics to deter voting and other forms of Black activism.

De La Beckwith murdered celebrated leader, Medgar Evers and is rumored to have bragged about it. He was tried twice in 1964 in front of two all-white male juries, both trials resulted in hung juries. In 1994 Beckwith was retried with a diverse jury that consisted of eight Blacks and four Whites. On February 5, 1994, he was convicted of first-degree murder. Later he was sentenced to life in prison without the possibility of parole. It took 30 years for justice to be served but it was, De La Beckwith died in prison at the at the of 80 in 2001.

The 1996 movie “Ghosts of Mississippi” tells the story of Evers murder and the trials that eventually led to the conviction of his murderer.

Today also marks what should have been the 22nd birthday of Trayvon Martin. Martin went from being an unknown kid to a cultural figurehead in death. On February 26, 2012, Martin was visiting his dad and had the misfortune to walk to the store for snacks and catch the eye of an overzealous neighborhood watch leader. George Zimmerman called 911 after seeing Martin walking through his community, on the phone with police, it was obvious Zimmerman was stalking the 17-year-old. The dispatcher blatantly asked Zimmerman if he was following Trayvon Martin and advised him to stop his pursuit. Within minutes Trayvon Martin lies dead on the ground from a gunshot wound to the upper body. Within what seemed like hours but may have been days, a photo of his lifeless body went viral.

There was widespread outrage when the shooter was questioned and released by the police initially with no charges filed. Eventually, Zimmerman was charged with and acquitted of second-degree murder.

In the wake of his death, Martin’s parents became civil rights activists in their own rights. Just days before what would have been Trayvon’s 22nd birthday, his parents, Tracy Martin and Sabrina Fulton, released a book about her son’s death. “Rest In Power: The Enduring Life of Trayvon Martin,” that was released this past Tuesday.

The Trayvon Martin Foundation will hold a “Peace Walk” celebration on Martin’s birthday on February 11, 2017. “It speaks to what he was doing: Walking home, in peace,” says s mother, Sabrina Fulton. “He wasn’t allowed the opportunity to do that. The message we have is that we want our young people to know that they have the right to walk in peace … without being murdered.” 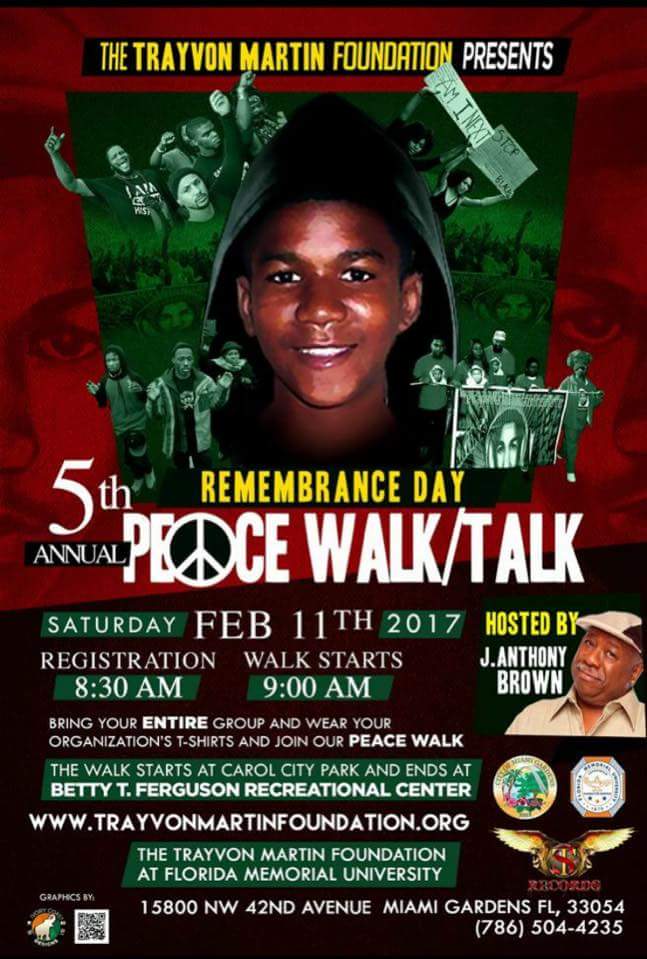