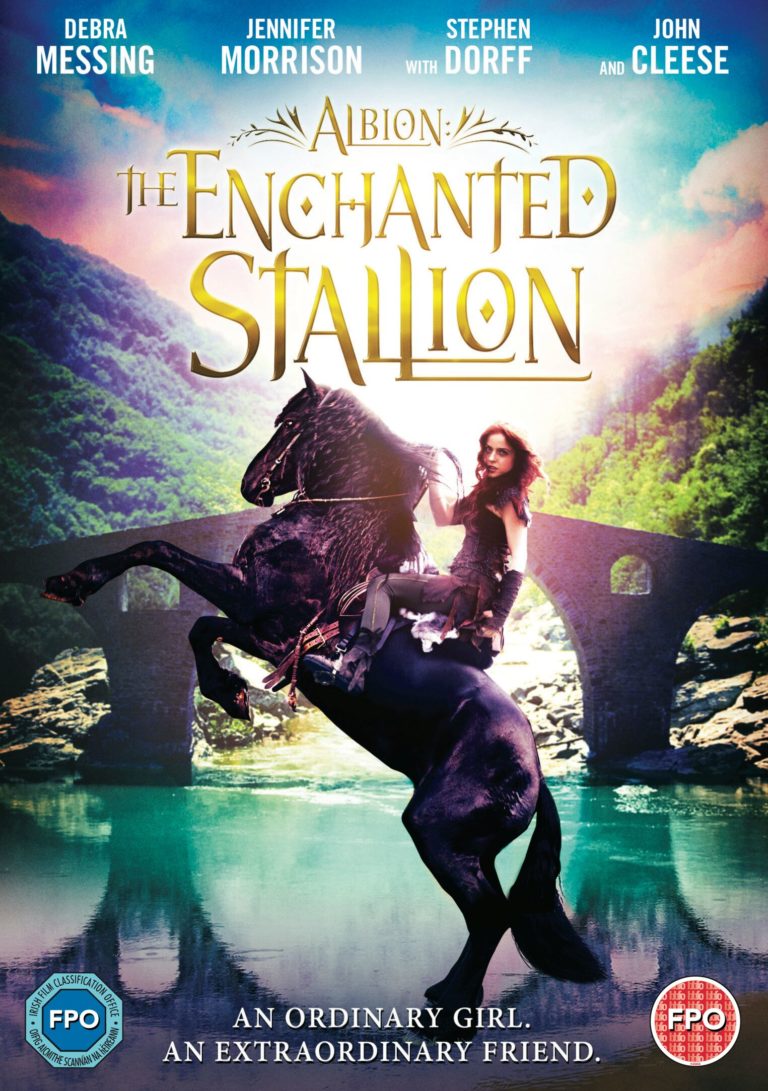 Castille Landon is a 25 year old Harvard and Oxford-educated director, writer and actress whose film, “Albion: The Enchanted Stallion”, will soon be released on VOD.

“Albion: The Enchanted Stallion” follows a thirteen year old girl, tasked with the responsibility of caring for her disabled father, who is transported by a magical black stallion to the mystical world of Albion, where she discovers that she is the key to saving an entire race of people. The film includes acting icons Debra Messing (“Will and Grace”), Oscar-nominated John Cleese (“Monty Python”) and Jennifer Morrison (“Once Upon A Time”).


What inspired you to create the film ‘Albion: The Enchanted Stallion’?

My initial inspiration was thinking about a “Game of Thrones” for kids. I wanted to do something really cool that would’ve spoken to me — seeing a young girl who relies on her own innate abilities, rather than superheroes, to fight the enforcers of the status quo in order to forge a more balanced society; that’s inspiring to me and I think it has universal appeal. As I started really diving in, I realized that the films that shaped me most were those I watched as a young person: the classics like Princess Bride, Grease, and Dirty Dancing and kids films like Mulan, Hercules, and Black Beauty. I literally watched those films on repeat. You have such an incredible opportunity to impart messages when you’re making family films.

Congratulations on your film ‘Apple of My Eye’ being sold to Sony Pictures Worldwide! Tell us what it was like to take that film from start to finish, and then have it sold to a major company like Sony.

Thank you! As a young female filmmaker, it’s a dream come true to be able to sell to a company like Sony. It really validates you and gives you an extra confidence boost and lets you breathe. You don’t feel like you’re hustling the entire time. Well, let me clarify— you don’t feel like that AS MUCH when you know your investors, those people who took a risk on your vision, are going to have their money returned. And it feels amazing to know that you’re not just making something in a vacuum. People are going to see this film, and that’s the point of it all, right? The entire experience of making “Apple” was insane because it was written, cast, shot, sold, went through post (editing, sound, color, etc), and was out on shelves at Walmart across the country all in about a year.

As a director, what say do you have in the casting process? What is the most challenging thing about casting a film?

Because I’m currently doing independent film, I’m able to choose every actor for every role. That being said, the majority of the roles end up being cast through offers, meaning they go to “name” actors, or those who have recognizable credits because the more actors like that you have, the higher the likelihood the film gets distribution and makes money. For the roles where I’m able to cast whoever I want (i.e. it doesn’t have to be a name actor), I’ll usually write the roles for specific actor friends. When I’m looking to fill a role where I don’t already have someone in mind, my preferred process is to have actors go on tape and then I like to meet with my top picks over coffee to talk about the character and script. So it’s not a traditional casting process. To me, someone either “is the role” or they’re not, and I’d rather get to know the actor as a person as I think it says considerably more about them.

What do you enjoy more: writing or directing?

Directing is my main passion because it involves an entire community of people coming together for a common goal. I’m a pretty introverted person on a day-to-day basis, but when I’m on set directing, I get this rush of endorphins from being able to connect with my cast and crew. Every day is different and I’m continually surprising myself, doing things and communicating in ways that I don’t get to in everyday life, and collaborating with incredible humans to achieve the greatest results possible.

That being said, I do also love writing and over the last year, I’ve been able to really dive in and branch out. I’m currently getting my Master’s in Creative Writing, so it has been forcing me/allowing me to experiment in a variety of genres and media. I just started writing poetry a few months ago and LOVE doing that. I randomly wrote and submitted a poem to an anthology commemorating 100 years of Ella Fitzgerald and it got chosen for the book, so I’m going to be published now. It’s very fun!

As a writer, what do you do when you get writer’s block and need some inspiration?

I read a ton, about everything. Memoirs about addiction and mental illness are my absolute favorite, and they stir up a lot for me. I also watch a lot of TED Talks, particularly about mental health, neuroscience, behavior and social psychology. And I’ve recently discovered how much focusing on positivity and gratitude helps me get through any of the funks I get myself into, which I think is a common thread amongst creative types (and probably all types, really).

Horseback riding runs through my blood. I’m a fourth generation equestrian, and riding horses was something my grandma, mom, and I did together all through my youth. My grandma competed in show jumping at Madison Square Gardens when she was younger (she also raced cars, so she’s an all-around badass). I sat on a horse for the first time when I was a baby, and got my first pony when I was two or three. It taught me to be tough and when you’re competing at a world-level, as I started doing when I was six. You learn the value of respect— for your coaches, animals, your fellow barn-mates, your competition, and the value of winning and losing. It taught me so many life lessons and, for me, there’s no greater feeling in the world than being on the back of an insanely talented five-gaited horse who is on the verge of being out-of-control, but you’ve got a sort of pact with him/her, so you’re this single entity. It’s the best.

As a filmmaker, why did you decide to attend Harvard?

It was the only program to which I applied. I honestly was so tunnel-visioned about acting, I didn’t necessarily intend to go to college, but it was a requirement of my mother’s for her to continue helping me on my journey, so I applied. Now, I am so extraordinarily grateful that I did it and actually graduated. I count it as one of my great accomplishments thus far, so any time I’m doubting myself, I’m able to say “you did that, you’re capable of doing this too”. For what it’s worth, I didn’t study film there— my BA is in English.

After graduating from Harvard, what inspired you to further your education at Oxford University? Why did you select Oxford?

I’m a life-long learner. I have this sort of insatiable curiosity, so I will literally sit and listen to a great lecturer speak on any subject about which they’re passionate, if they’re able to explain it in a way that is dynamic and accessible. And yes, I realize those are big “ifs”. As far as Oxford, it was also the only program to which I applied and I honestly did not think I’d get in. I did a study abroad program there in high school and ever since, it has been one of my dreams to attend such an incredibly gorgeous and historic institution. I applied without much hope with an entrance essay entitled “Life is Short (And So Am I)”— I really didn’t think I’d be able to swindle my way in.

If you could pick one actor/director/writer to work with on a film, who would it be? What kind of film would you collaborate on?

I’m absolutely in awe of the artistic ability and integrity of the director Julian Schnabel, so I’d love to work with him— though he doesn’t seem like the type who would be into collaboration.

As far as actors, since Bette Davis and Lucille Ball aren’t options, I’d most like to work with Christopher Plummer or Jeff Bridges. I’d just love to sit on set with them and hear their stories in between takes. That’s what has been so great about getting to work with legends like John Cleese and Burt Reynolds— they aren’t just actors, they’re storytellers. And I love stories.

You enjoy hot power yoga. What else do you do to stay fit and healthy?

I’m a bit obsessive about my healthy lifestyle. I do a minimum of two hours of cardio a day and, when I’m home or somewhere that has hot yoga, I go to Corepower and do at least a class, if not two, per day. I also eat a diet consisting of 95% organic fruits and veggies, though I do have a sweet tooth and I’ll try a bite of anything if I’m traveling, to have the experience. Probably the most beneficial thing for me has been intermittent fasting. I came upon it after struggling for years with different diets, and started narrowing the window in which I ate, and come to find out, it’s actually a real thing that has been scientifically researched (and termed intermittent fasting, which I picked up after I started doing it).