A former logo of the German sportswear maker Adidas is on display in the company headquarters in Herzogenaurach, southern Germany, during the annual press conference on March 8, 2017. / AFP PHOTO / Christof STACHE (Photo credit should read CHRISTOF STACHE/AFP/Getty Images)

Completing the Boston Marathon, which many consider being the pinnacle of marathon running, is the ultimate feat.

But some finishers of Monday’s race have taken issue with a congratulatory email sent by Adidas, the sponsor for the 121st annual race.

The subject line of the email, sent on Tuesday by Adidas Running, read: “Congrats, you survived the Boston Marathon!”

The message was met with backlash given the history of the Patriot’s Day race. Some finishers questioned how Adidas did not realize the connotations of the message after three people were killed and more than 260 were injured in the 2013 Boston Marathon bombing.

Customers reacted angrily on social media with one Twitter user writing: “Hey @adidas, not the best choice of words for subjects for email blasts to your members, you think? #BostonMarathon #BostonStrong #changeit.”

In 2013 three people were killed, and more than 260 wounded, during the annual running event when two bombs exploded near the finish line.

The sports company quickly apologized, saying it was “incredibly sorry” for the “insensitive” subject line about Monday’s race.

At least two survivors of the 2013 bombing participated in this year’s event. 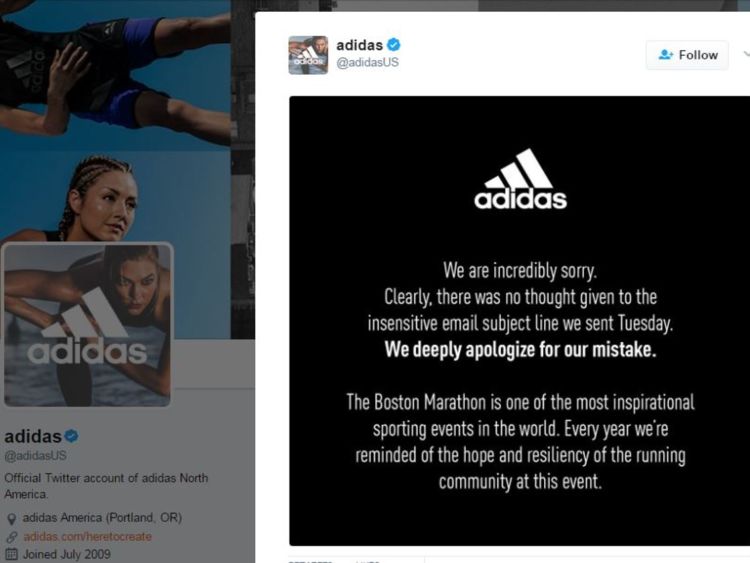 The apology tweeted by Adidas.

“Clearly, there was no thought given to the insensitive email subject line we sent Tuesday.

“We deeply apologize for our mistake.”

“The Boston Marathon is one of the most inspirational sporting events in the world. Every year we’re reminded of the hope and resiliency of the running community at this event.”

The 2021 MLS All-Star Game Uniforms Have Been Revealed

NFL Players Will be Fined For Wearing Yeezy Cleats, But Adidas May Help

Life-Saving COVID Tests Freely Delivered By Postal To You

Is Cold Laser Therapy Right for Me?