I rate this film as being Mega-riffic, with Mega-Stars, that will bring in Mega-Bucks at the box office, and can foresee it being a Mega-Hit this weekend!

A 75-foot long prehistoric massive shark creature known as the Megalodon, attacks a deep-sea submersible, leaving it disabled and trapping the crew at the bottom of the Pacific Ocean.

With time running out, rescue diver Jonas Taylor (Jason Statham, typecast as the anti-hero and widely known for his thriller-action roles) must save the crew and the ocean itself from an unimaginable threat. I really wasn’t interested in seeing this film, but I am so glad I did because it was action-packed, full of surprises, made me laugh, cry, cover my eyes and scream out loud throughout the film.

The IMAX experience made every notion from ‘The Meg’ so defined I swear I thought I was in the movie. The film took historical facts and stretched them into a 114mins (1hr and 54mins) epic production, “Megalodon, meaning “big tooth”, is an extinct species of shark that lived approximately 23 to 2.6 million years ago, during the Early Miocene to the end of the Pliocene.” The special effects were so life like you would have sworn you were wearing 3D glasses.

I rate this film as being Mega-riffic, with Mega-Stars, that will bring in Mega-Bucks at the box office, and can foresee it being a Mega-Hit this weekend!

The Meg is scheduled for release in the US and China, Friday, August 10th!

Viola Davis received the Best Actress in a Leading role accolade at this year's Screen Actors Guild (SAG) awards. If history repeats itself, she might also win an Oscar for Best Actress.
byBernadette Otieno 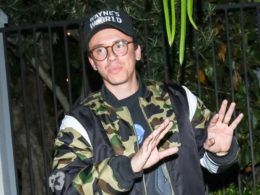 There was a time when being homosexual was considered a mental illness. Thankfully times have changed and these celebs can openly love who they want.
byMelony Hill