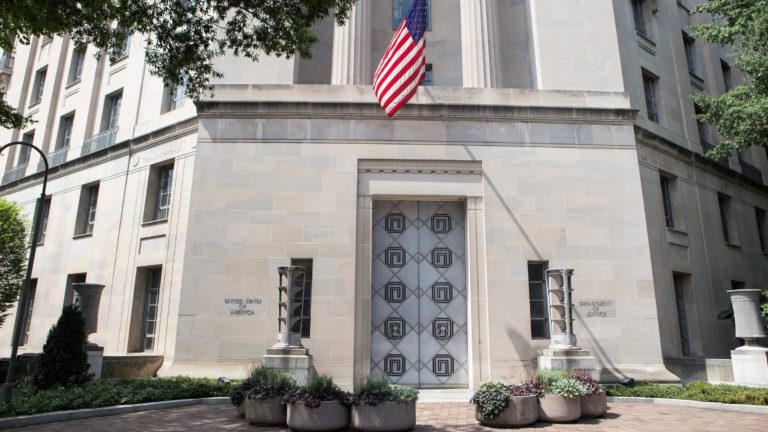 U.S. Attorney for the Southern District of Georgia is looking into the reason it took more than two months to arrest the suspects as Ahmaud Arbery’s shooting death will be investigated as a hate crime according to the Arbery family’s attorneys.

The attorneys representing Arbery’s family, S. Lee Merritt, Benjamin Crump and L. Chris Stewart, announced On Monday, that they have met with the U.S. Department of Justice and U.S. Attorney for the Southern District of Georgia Bobby Christine.

According to their statement, Christine is concerned about the length of time it took to arrest Travis McMichael, his father Gregory McMichael and neighbor William Bryan.
According to Mr. Christine, his office is investigating why it took so long to arrest the individuals responsible for Mr. Arbery’s death,” the statement read. “This would involve the consideration of both civil and criminal charges against state officials and other conspirators involved in the murder of Ahmaud Arbery.”

Ahmaud Arbery died on Feb. 23 in Brunswick, Georgia, after he was shot three times during a struggle with Travis McMichael. Gregory McMichael was armed and watched the death from the bed of a pickup truck. Bryan recorded the last moments of Arbery’s life on his cellphone while sitting in his car.

Gregory and Travis McMichael were arrested on May 7, two days after Bryan’s video was leaked to the media. A Brunswick-area lawyer later revealed Gregory McMichael gave him the video so it could be shared with the public. The father and son were charged with felony murder and aggravated assault.

Bryan was arrested on May 21 and charged with felony murder and criminal attempt to commit false imprisonment. Cobb County District Attorney Joyette Holmes is prosecuting the case. The metro Atlanta prosecutor is the fourth DA to take the case after Brunswick District Attorney Jackie Johnson and Waycross District Attorney George Barnhill recused themselves due to conflicts of interest.

The third DA, Atlantic Judicial Circuit District Attorney Tom Durden, who was handling the prosecution when the McMichaels were arrested, saw the case taken away from him and given to Holmes by Georgia Attorney General Chris Carr. Gregory McMichael used to work as an investigator for Johnson’s office. After Johnson removed herself within less than a week of the date Arbery was killed, the case was given to Barnhill. However, Barnhill’s son is currently a prosecutor working for Johnson’s office so Arbery’s family requested his recusal.

Before Barnhill handed the case off to Durden, he already had told the Glynn County Police Department there was no reason to arrest the McMichaels and Bryan, according to multiple reports.

“It is my professional belief the autopsy confirms what we had already viewed as shown in the video tape, with the photographs & from the witness statements taken immediately at the scene,” Barnhill wrote in a letter to the police. “We do not see grounds for an arrest of any of the three parties.”

Christine refused to confirm or deny his plans.

“Our office does not discuss active investigations, including addressing whether those investigations are or are not taking place,” spokesman Barry L. Paschal told CNN in a statement. The Georgia Bureau of Investigation already had announced a probe into the conduct of the recused prosecutors in early May.

Merritt, Crump and Stewart expressed confidence in the DOJ’s intentions in their statement.

“We left that meeting feeling satisfied that the DOJ would do their part to fully investigate all players involved in this murder and that they would hold those responsible accountable,” they said.

The Department of Justice also has previously announced it is considering federal hate crime charges against the suspects. Georgia is one of four states without a hate crime law. Hate crime charges typically act as sentence enhancers for other charges. Only three other states, Wyoming, South Carolina and Arkansas, lack hate crime laws, CBS reports.