Ruffalo and Reynolds aren’t exactly the same age; the former is 53 while the latter is nine years his junior.

Even though working with marvel-related characters, Mark Ruffalo and Ryan Reynolds are in different parts of the comic book movie-verse.

Things might change a little bit as Marvel, who owns Bruce Banner/Hulk, and Fox, who owns Deadpool, are now under the same umbrella. All thanks to that huge yet worrying Disney merger. Finally, they get to share the same space thanks to Netflix. Even though it’s for a non-superhero movie.

And apparently, according to The Hollywood Reporter, they’re going to play father and son.

The Adam Project, and it’s been in the works for a while. In fact, it just started shooting in Vancouver last week. The movie stars Reynolds as a man who goes back in time, seeking help from his 13-year-old self. He also rubs shoulders with his physicist dad, which we now know will be played by no less than Ruffalo. (Catherine Keener is also on hand as the villain, who has stolen some powerful tech from Reynolds’ dad.)

Ruffalo and Reynolds aren’t exactly the same age; the former is 53 while the latter is nine years his junior. But they’re still peers, and they both tend to lean towards the more comedic side of comic book cinema. You could even argue that this Hulk moment from the first Avengers movie is funnier than anything in either Deadpool outing.

When Life Gets Too Hard… Shocking Celebrity Suicides.

Often, the people who dedicate their lives to making other happy, are suffering themselves. These celebrity suicides shocked the world.
byMelony Hill

The Text Heard ‘Round The World Came From Breezy’s Manager

Chris Brown and his manager's been getting busy!
byBrennen Jones 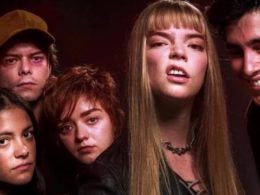