Morgan has a gangrenous infection. He smells like death, so the walkers believe him to be one of their own, which allows him to traverse among them without rubbing himself in zombie guts. It’s a good twist.

Fear the Walking Dead had a very slow start as a series back in 2015 and progressively improved until around the fourth midseason finale when Madison Clark (Kim Dickens) was slain off the series.

They were stand-alone stories.

However, if the opening episode of the sixth season — the best episode since Madison died — is any sign, maybe the plan might work out for showrunners Andrew Chambliss and Ian Goldberg.

For those who may have forgotten, all the surviving Fear characters were split up by Virginia last season and taken to separate quarters. Each episode of this season, we have been promised, will center on a separate character or characters and tell disparate, stand-alone stories about their struggles to get out from beneath Virginia’s rule.

If you’ve paid any attention whatsoever to the marketing or trailers for the sixth season of Fear the Walking Dead, there is nothing surprising about the fact that Morgan Jones survived the events of the fifth-season finale, when he was shot by Virginia and left to die, surrounded by walkers. He not only survived, but some still unknown character (perhaps Sherry?) saved him and sort-of nursed him back to health.

The sixth season premiere opens several weeks after those events. Morgan has a bushier beard, bloodshot eyes, and the walkers mysteriously leave him alone. It’s an interesting new wrinkle: Morgan has a gangrenous infection. He smells like death, so the walkers believe him to be one of their own, which allows him to traverse among them without rubbing himself in zombie guts. It’s a good twist.

Meanwhile, Virginia has hired a post-apocalyptic hitman, Josiah LaRoux (Demetrius Grosse), to track Morgan down and kill him. LaRoux is easily the best villain that Fear the Walking Dead has ever had. He is sufficiently menacing, and his whole deal is that he brutally, unmercifully decapitates his targets and collects their heads in labeled boxes. He’s terrific, and I almost wish he could stick around for a few more episodes because Fear has otherwise had a history of terrible villains.

In any respect, Morgan is in a very bad way, and he has Josiah LaRoux trying to track him down, which is when Morgan meets Isaac, whose wife is pregnant, about to go into labor, and holed up behind a dam that is surrounded by walkers. Isaac can’t get to his wife to bring her supplies, and so he recruits a reluctant Morgan to help since he is able to walk invisibly among the zombies. After Isaac saves Morgan from an attempted hit by Josiah LaRoux, Morgan agrees, but instead of quietly walking through the zombies, Morgan goes full-Morgan — just like old times! — and kills them. Josiah LaRoux enters again, and this time, Morgan is able to kill Josiah, allowing Isaac to bring supplies to his wife, although we quickly learn that Isaac is close to death, having been bitten by a zombie while hunting down the necessary supplies for his wife. Before Isaac dies, however, he and his wife (who successfully gives birth to a baby girl) remove the bullet from Morgan’s chest, which probably means that he will no longer smell like a dead person.

There are two tags to the episode. In the first, Virginia discovers that Morgan has put Josiah LaRoux’s decapitated head in the box labeled “Morgan Jones,” and while Virginia initially seems to appreciate that Morgan is a bigger threat than she anticipated, she’s terrified to get a transmission from Morgan on her walkie talkie. “Morgan Jones is dead,” Morgan says to her. “And you are dealing with someone else now.”

Old-school, killing-machine Morgan is back!

The final tag of the episode, meanwhile, suggests a season-long arc about two men searching for a key, which we saw Josiah LaRoux collect from one of his targets. We don’t know if the two men are good or bad, and we don’t know what the key opens, although it possibly opens up something in a submarine stranded in the desert. We do know, however, that that key is in Morgan’s possession. Given the nature of this season, however, it may be several more weeks (or longer) before we see Morgan again.

We will see a lot of new communities this season, and a number of standalone stories. I am guessing that next week will focus on Strand and Alicia.

The organization has a policy to decline funding from donors whose activities do not align with our mission and values according to the director.
byBien Luigi

Does Tyga really have feelings for Kylie Jenner or is this a political move to help his struggling music career?
byDejah Wansley

After a three year hiatus, Joshua Worden is set to release a 12-track EP titled 'Cinders.' It will serve as a follow-up to his 2014 album, 'Into The Fog.'
byVictoria Johnson 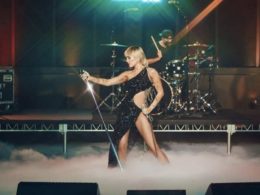 Elsewhere during the conversation, she chatted about her work ethic, Dolly Parton, and more.
byBien Luigi