Tim Tebow Does it Again: The Denver Broncos Defeats Pittsburgh Steelers on First Play in Overtime

Tim Tebow strikes again and knocks the mighty Pittsburgh Steelers out of the playoffs.

In the NFL Playoffs, you have to expect the unexpected. Every year there’s at least one team winning a game or two that you thought had no chance of winning.

Last year it was the Seattle Seahawks defeating the New Orleans Saints in the first round. The year before it was the New York Jets beating San Diego. This year it’s Tim Tebow’s Denver Broncos knocking off last year’s AFC champs the Pittsburgh Steelers.

Yes, Tim Tebow has become a household name by delivering his late game heroics throughout the season, but the Denver Broncos limped into the playoffs on a 3 game losing streak, and let’s not forget that this was Tim Tebow’s first playoff game…EVER!

As a Pittsburgh Steelers fan, it’s hurting me sooooooo much right now for me to even write this post but I have a feeling that a lot of people are looking to chime in on this story, and rightfully so.  I have a duty to put this up.

Tim Tebow finished with 316 yards passing, with Demaryius Thomas accounting for 204 of those yards on just 4 catches.  The Broncos are heading to New England for a second-round game against the top-seeded Patriots on Saturday night.

The Denevr Broncos led 20-6 going into halftime but the Steelers battled back and tied it on a pass from Big Ben to Jericho Cotchery with 3:48 left on the clock in regulation.  The Steelers D played their part on the next series and forced Denver to punt.  And things looked good for the Steelers as they marched the ball down to Denver’s 45 yard line, which they only needed about 10 yards to get into field goal range.

A sack, fumble, and a penalty pushed the Steelers back and into overtime.  Denver won the toss and elected to receive.  And with the new playoff overtime rules in effect, that meant that they would have to score 6 points to not give the Steelers a chance to come back and win the game.

But it didn’t even matter because this happened… 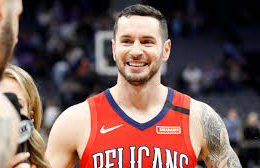 Lil’ Romeo Gets Full Scholarship to Play B-Ball at USC

Percy \”Romeo\” Miller (a.k.a. Lil\’ Romeo) is following his dad, Master P, and lacing up his hoop shoes…
byBrennen Jones

Woods has endured numerous surgeries on his back and knees. But some might have expected him to address his tumultuous personal life instead.
byBien Luigi

Imagine you’re tired after a three-hour struggle to get to MetLife Stadium to watch an NFL match. As you pull yourself between the seat rows to find your seat, you realize you made a terrible mistake. You booked a seat that is hidden in a dark corner of the stadium.
byTUT Staff