Egypt is having a new opposition group rising: what does the black bloc in Egypt demand? Who are they?

On the already scattered scene of opposition, a new group has been on the rise recently, formed by youths, calling itself a Black bloc in Egypt.

Although recent in the Egyptian streets, the notion itself is not new: it has been well known already in countries of Europe and America to describe a tactic commonly used during large-scale political demonstrations, occasionally turning into a street fight, resulting in vandalism, but usually refraining from violence against the population. The major characteristic of this group is their black clothing and mask and waving black banners that increases the sense of unity among them and differentiation from the outsiders, while makes differentiation among them close to impossible.

Although well visible in the streets, the group stays as enigmatic as possible; their goals and motivations remain unclear, as well as their identity, as the members systematically avoid media contact. Yet, it has become clear enough that the Black Bloc in Egypt engages itself in the battle of the still unsatisfied youth against the governing Muslim Brotherhood and says to stand for the people’s will, engaging in clashes with the police on the side of the protesters.

Given this mysterious aura that surrounds the purposes and the identity of the black bloc, many different opinions and views circulate over the country. Other activists see them as a few angered teenagers, thinking they are living a video game, who will eventually get bored and go home, while the Islamist parties of Egypt portray them as a harbingers of anarchy and danger. Both the Jama’a al-Islamiyya and the Jihad Organisation strive to arise public resentment against the Black Bloc, yet use different ways of doing so. While the Jama’a al-Islamiyya relies on religious notions that reject anarchy and mischief to attack the new opposition group, the Jihad Organisation rather plays on nationalist sentiments by depicting the Black bloc as a foreign-backed mob to disseminate discord and chaos. Yet the conclusion is the same: eliminate the Black bloc in Egypt. The bloc has already been accused of vandalism, aggression, attacks against governmental institutes, and terrorism.

However, the group also found its supporters in the crowd. Many attribute positive values to the group and agreeing with the basic idea of fighting the regime that they perceive as unjust, and many would also bet for the victory of the Black bloc against the Jama’a in their “game”.

With the appearance of this new opposition group, the political landscape of Egypt is only getting more and more complicated. The major set seems to be a battle against Islamists and opposition, while the opposition itself struggles with a lack of unity and many divisions, making it harder than ever to come to a conclusion among themselves, and even harder to achieve an all-country compromise. Yet, the Brotherhood seems to stand strong in the storm of political battle. 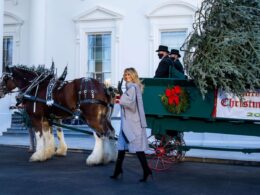 Meanwhile, the Centers for Disease Control and Prevention said the “safest choice” is to celebrate “virtually or with the people you live with.”
byBien Luigi
Read More

A surprising power transition in Qatar took place recently as the former emir, Hamad bin Khalifa al Thani handed over power to his second son, Tamim. The transition is welcomed and trusted, but does not alleviate all fear of the people that the new emir will not be able to live up to the expectations and be just like his father.
byRenáta Janka Tóth

The Past 72 Hours May Cost Donald Trump His Whole Campaign

Donald Trump has been talking out the side of his neck again and this time no one's having it.
byWhitney Marquise Acoff