LeBron’s Old Rival Now Wants to Be His Teammate

After being waived by the Atlanta Hawks, DeShawn Stevenson now wants a shot at playing for the Miami Heat, and play with his former rival, LeBron James.

Maybe he’s joking but I doubt it. The other day free agent DeShawn Stevenson tweeted out that he wants to join the Miami Heat and he even personally asked LeBron James to make it happen.

Miami Heat Where I Wanna Go!!! Lebron Make it Happen

This has to be a joke because DeShawn Stevenson is supposed to hate LeBron.

Way back when LeBron was on the Cleveland Cavs and DeShawn was on the Washington Wizards, the two teams squared off in the playoffs almost every year for like 3 or 4 years straight. The Wizards would put up a good fight but the Cavs would always win.

Apparently Stevenson didn’t like LeBron and had comments for him that  weren’t too nice. The beef went on for a while and eventually involved rap star Jay-Z and newcomer at the time, Soulja Boy.

LeBron compared himself to Jay-Z and Stevenson to Soulja, which isn’t a compliment at all. Eventually Stevenson and James faced off in the NBA Finals playing for different teams, the Mavs and Heat, and surprisingly Stevenson came out victorious although Dirk had more to do with that than Stevenson.

Fast forward to now where LeBron is on top of the world. He’s coming off back to back NBA titles, MVP’s and Finals MVP’s. I can understand why you would want to be a part of that but at the same time it’s kind of pathetic.

Regardless of if you guys are beefing now or not, you can’t go join LeBron. He called you Soulja Boy man, it doesn’t get any worse than that. Plus it just wouldn’t be a good fit, he really won’t be bringing anything special to the team. I think it’s funny that Stevenson wants to join up with the man he used to beef with, hey if you cant beat ’em join ’em.

Simone Biles reveals she was among the over 130 women allegedly abused by former USA Gymnastics doctor Larry Nassar.
byPascal Mnyika 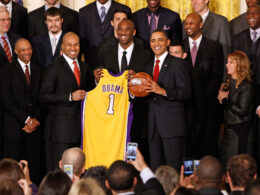 Since Trump has been in office, winning teams have either moved up their visit to occurred before Trump’s succession or totally precluded the invitation.
byBien Luigi

In the French League 1, “PSG” has gone far ahead of its main competitors in the middle of the season is leading again.
byTUT Staff

A video shows Smith kicking the white man several times until he finally manages to get up from the ground.
byBien Luigi