Is Beyonce manufacturing her new activewear line Ivy Park in sweatshop like conditions? As a mega star Beyonce knows everything she does becomes news so you’d think she’d think twice before allowing herself to be mixed up in such a scandal. It’s not as if she is the only one who has been accused. If it’s found she is subjecting workers to sub par work environments and pay she wouldn’t be the first. Sears, Nike, H&M and Walmart have all been caught up in sweatshop scandals.

You may even remember the emotional tear-filled apology Kathie Lee Gifford  gave when she was caught doing the same thing Beyonce is accused of doing.

Ring the alarm! Workers who manufacture Beyonce’s Ivy Park activewear line in Sri Lanka are making shocking accusations. Last week an article in the British Sun paper was published  comprised of interviews with the Sri Lankan workers who work in the MAS warehouse where Ivy Park is made. The interviews tell of horrible work and living conditions the workers face on a daily basis.

Beyonce says she wants her Ivy Park gym gear to support and inspire women but the women making the 228-piece clothing line seem anything but inspired.

Statements given to the Sun include:

We don’t have our own kitchen or shower; it’s just a small bedroom

We have to share the shower block with the men, so there isn’t much privacy. It is shocking and many of the women are very scared.

The work is hard — it’s just the same, same, same every day.

We don’t get to go home much because we work all the time. They say if you work you can go up, up, up, but that’s just office workers. For us it stays the same always.

The last two statements came from a machinist earning about $125.30 per month.

Many of the workers have come from small countries and cities some as far as 200 miles away to find work. Now that they’ve found it, they work sometimes 60 hours a week making an average of $6 a day. They are not entitled to sick pay and not paid holiday time in their first year. They work 10 hours a day with ONE 30 minute break. Many are forced to rent space in the warehouse’s 3 story boarding house where they are subjected to a 10:30 p.m. curfew. Others are forced into even worse situations. One woman is staying in a guest house that more resembles a hut.

One 40-year-old worker told the sun “I have worked here many years and my money is a bit more now. I have to work many hours overtime to pay for everything and there is no money left afterwards.”

MAS Holdings, the company manufacturing Ivy Park employs 74,000 workers, 70 per cent of them women, in 48 factories in 15 countries across Asia according to the Sun.

“This is the norm and the same applies for all the big global brands,” says workers rights advocate Anna McMullen, policy director at Labour Behind the Label. Labour Behind the Label is a  company that fights for workers rights. The hope to  ensure that  brands are responsible for the working  conditions in their factories and that  working  conditions in their supply chains are decent and resolve problems when they arise.

“It takes a superstar name like Beyonce to make people say ‘oh, this is horrible’, but this is the reality that’s happening every day, every week, every month, for all the big brands,” she added.

Beyonce herself has yet to comment on the allegations but Ivy Park did give CNN Money a statement which said in part that they have a “rigorous ethical trading program.” It also read

“We are proud of our sustained efforts in terms of factory inspections and audits, and our teams worldwide work very closely with our suppliers and their factories to ensure compliance.”

“We expect our suppliers to meet our code of conduct and we support them in achieving these requirements.”

Why aren’t more people screaming foul? Well no one is breaking any laws. While we here in America and most civilized countries we don’t condone slave labor, not everyone see’s it the same way. As horrible as the pay and conditions sound, at $6 a day MAS pays their workers more than double the minimum wage of $2.68. Am I the only one who shakes her head when she finds out that millionaire, civil rights activist   ( so I’m told she is don’t quote me), mother, woman, Beyonce, would be employing thousands of women who are making less than $200 a month to make her fashion line? Ivy Park is  sold at Nordstrom,Top Shop etc ranges from $25 to $235 per piece. The women making these items could never even dream of affording to wear them.

An op-ed article on The NY Post suggests that we should nominate Beyonce for a Nobel Prize because she is keeping these women from prostitution by offering them slave wages, excuse me, employing them. The author of the article, Bryan Riley, does admit however, that by U.S. Standards the warehouse is a “sweatshop” but he wants us to judge it by third world country standards.

I recently watched a documentary on Netflix about this very thing called “The True Cost.” You should see the condition of some of these warehouses and factories the clothes are made in. There have been recent deaths when fires broke out and buildings collapsed. These building rarely have adequate facilities or exits. It’s a must see, especially when you think about the money you’re spending on one piece of clothing knowing the person who made it doesn’t make enough in a month to buy it.

Forbes estimates that Beyonce’s net worth is approximately $450 million, you’d think  she’d be able to afford to  pay workers a living wage.  Beyonce  owns Ivy Park with Sir Phillip  Green  who is the reason these working conditions came to  light. In fact, just last week over 100 people protested outside the London flagship Topshop location. Phillip Green, the billionaire owner of Topshop and partial owner of Ivy Park. The protest is said to have been led by living wage  activists United Voices of the World union.

Green  is  under scrutiny after recently abandoning  one of his businesses and it started to collapse, selling it for $1. The deal put the jobs of 11,000 people  at risk and  left a pension  fund deficit of $571 million.

What do you think of the conditions Ivy Park is being made of? Do you think Beyonce should be partnered up with Sir Phillip Green given the accusations of his less than legitimate business dealings? Either way all this negative press can not be good for Ivy Park.

Thanksgiving is right around the corner and Macy’s is gearing up for their annual parade. Besides football and…
byBrennen Jones

As we reported yesterday, your boy John Mayer’s penis is a racist and now he’s apologizing for his penis’ behavior.…
byBrennen Jones 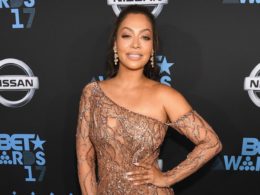 La La has been spending time focusing on herself and her own happiness, and it shows. According to her, self-love is the key to healing and growing.
byBien Luigi