A little over two weeks have passed since the conclusion of the Democratic National Convention. Hillary supporters got what they’d expected going into the week-long event in Philadelphia. Despite the controversies and the largely divided popular opinion of democratic voters, Hillary is the nominee. Her camp will be focused on winning the election over the next three months. Bernie Sanders supporters are saddened that their candidate didn’t get the nod. What’s critical is that many of his supporters are electing not to vote, which is a dangerous move. As a Bernie supporter, Hillary absolutely has my vote. If you’re still Feeling the Bern, it might be best to direct that energy elsewhere.

Prior to this election year, I’d hardly followed politics. The narrative was not for me because politics and politicians do not concern themselves with black people. I say that with conviction regardless of Barack Obama. My neighborhood in West Philly celebrated on the streets the night Obama was elected. While there is certainly cause for celebration of that, I felt wary. Just because we had a black president in the oval office didn’t mean that all of our problems were resolved. In fact, I saw Obama’s election as the perfect distraction from the black community’s ongoing problems: poverty, education, disproportionate prison confinement numbers, the list goes on. But hey, we got a black president, so that means we’re good, right?

Wrong. The black community continues to suffer despite being half a century removed from the Civil Rights Movement. Most of its problems are being ignored by Americans, corporations and government. Popular media has stymied the progress and evolution of blacks by running claims that racism no longer exists; that there is no prejudice or discrimination or genocide, and therefore, America (specifically white America) does not have to worry about them. “They will not overcome their issues if they continue to kill each other.” “Black people are lazy.” These are things I hear and see in the news and on social media.

To say that blacks are lazy, uneducated by choice, and are not qualified for the jobs with which they affirmatively obtained is rooted in perpetuated ignorance. According to the US Census Bureau’s 2012 and 2007 Surveys of Businesses, black-owned businesses saw an increase of 34.5% from 2007 to 2012 and 60.5% from 2002 to 2007. According to the National Center for Education Statistics, in 1960, the rate of black college graduates was 3.1%. In 2005, The rate of black high school graduates attending college was 65%.

Let’s not forget that civil liberties for blacks are still relatively. The Civil Rights Movement was in the 1960s, roughly fifty years ago. The moms and dads of the “millennials” were born around then. Our grandpops and grandmas marched with MLK. You don’t have to go to a history book to learn about it. You can just go back around the way and ask them. Activism in the ‘60s functioned differently because communication was different. There were no Facebook invites to marches, protests or sit-ins. Anyone who wanted to fight for their rights had to get up and leap into the foray, and they did it together as a unit.

The same will have to apply for this generation of activism. Communities are crumbling. Opportunities are diminishing. The American economy continues to waver after its crashes in 2001 and 2008. Black people are in danger of being left behind.

For me, one of the highlights of the democratic race was when Bernie Sanders visited my neighborhood in West Philly. Bernie went into deep West Philly, to a street where even I don’t dare to walk down. He spoke to the neighbors about his campaign, even though many older blacks were Clinton supporters. Nearly 50% of household incomes are below $30,000 in that neighborhood.

Clinton didn’t reach out to my neighborhood. Maybe she didn’t have to, but either way, she didn’t do it anyway. But Bernie came to town. He preached the things he’d been preaching for decades. Bernie was one of those grandpops who was marching with Martin Luther King, Jr. Bernie’s visit was refreshing, but him visiting my neighborhood doesn’t accomplish an end goal on its own.

I’d realized what my responsibility through Bernie’s speeches. I’d only known poverty my entire life. I couldn’t let disenchantment keep me down. Not anymore.

It does not take one man or woman to make a change. It takes many of them. Their movement must be fierce, diligent, and precise before there is to be any change. Bernie Sanders inspired me in that regard. When I thought I was powerless or alone in this fight, he woke me up. Bernie woke up many people of different colors and socio-economic backgrounds. I felt invigorated. I felt confident. Obama first told us that yes, we can, but now, it’s become yes, we will.

Individuality has been implemented and perpetuated deep into the roots of black culture. The “I’m gonna do me” mentality works to an extent, but at some point, when one has already done them, it’s time to give back. Volunteering and educating are integral actions that need to become installations in the black mentality. Share information and seek progress through conversation, especially with those who are less aware.

The responsibility of those who have ascertained experiences and wisdom and compassion need to return to around the way and give back. If not, the community will not grow, it will not have the perspective and pragmatism it needs to plant seeds of not only opportunity or resource, but the seeds of hope.

Widespread change wasn’t going to happen overnight with the election of Bernie as president. It’s going to take time to invest and build within our own communities. But it is time to give back, or else we may be finding ourselves desperately clamoring for one man or woman to be our savior again in 2020. It’s up to us to save us.

Let’s take the lessons we’ve learned from this election year and move forward together hand-in-hand. 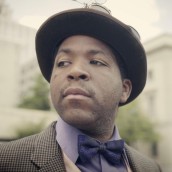 Kyle is the author of young adult fiction novel The Recital. He is the founding editor of the upcoming video game art magazine and podcast The Sidequest Enthusiast and is a full-time freelance writer. He resides in Philadelphia and reads Alice's Adventures in Wonderland at least once a year.