Former 3 Doors Down Guitarist Matt Roberts Has Passed Away

The West Ends Police Department responded to a call that reported ''a man either asleep or passed out in the hallway of his hotel.''

Matt Roberts, the former guitarist of rock band 3 Doors Down has died, according to several reports. He was 38 years old.

Darrel Roberts, Matt’s father, has confirmed the news to CNN. The two reportedly travelled together to West Bend, Wisconsin, where Matt was scheduled to participate in a benefit concert.

The cause of death is yet to be confirmed, but according to a statement issued by the West Bend Police Department they responded to a call that reported ”a man either asleep or passed out in the hallway of his hotel.” That man turned out to be Matt Roberts. ”There were no signs of trauma on the body, and the cause of death is unknown at this time.” 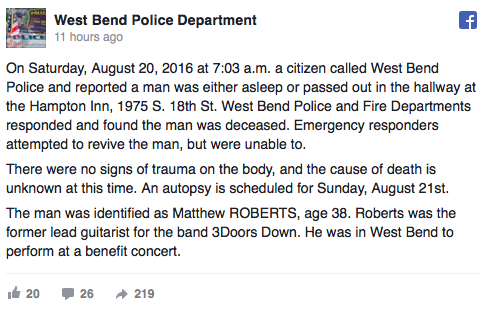 TMZ has speculated that Roberts died of a drug overdose. ”Darrell says he was woken up around 9 AM by detectives who informed Matt had passed away overnight. Darrell tells us prescription pills were involved … but he believes the possible OD was accidental.” They write on their website.

Roberts father did discuss his son’s past with prescription drug addiction with CNN. “I know he had prescription drug addiction,” he said. “He suffered greatly from anxiety. It’s crazy as a performer; he never liked crowds or liked places he didn’t know about as a baby, as a child, and this was his way of dealing with it and me and him talked about it often.” He also said he thought his son had ”beaten it all.”

Matt was one of the founding members of 3 Doors Down in 1996. He left the band in 2012 because of ‘health issues concerning blood circulation in his body.’ In a press release announcing his 2012 departure, Roberts had written ”3 Doors Down will always have a special place in my heart and it saddens me to take this time off, but my health has to be my first priority.”

On January 6, CNN Juxtaposed Fox News Hosts’ Frantic Text Messages About Trump With Them Downplaying The Events: ‘They’re Not Journalists’

Tommie Lee Has Been Out Of Jail/Drama For Two Years!

During A Live Shot, A CNN Reporter Was Startled When A Cicada Crawled On Him