Synopsis: Set to the backdrop of Awesome Mixtape #2, ‘Guardians of the Galaxy Vol. 2’ continues the team’s adventures as they unravel the mystery of Peter Quill’s true parentage.

Gunn’s Guardians Vol. 2 successfully expands on the first film. Some questions are answered, personalities and relationships develop, and sympathies are earned. Gunn and his team continue to bring Jack Kirby’s uniquely insane vision to the big screen, moving farther away from the singular look of earlier Marvel Studio films.

Layer that with Gunn’s knack for embracing nostalgia while at the same time parodying it with all the glee of a kid who’s been given all of his father’s old toys to play with.

Sprinkle over everything a cast with a chemistry rarely seen in any film and you’ve got yourself one weird but pretty damn good follow-up to a film that many had considered to be the best Marvel film to date.

The cinematography, the stable and funny story, the brilliant colors, that James Gunn added to this movie are just fabulous! The comedy is totally on point. Action scenes are great. The music? Well, you can listen to the GOTG Vol.2 songs over and over again and they all works perfectly in the context of the movie.

This movie was a very fun superhero film. It did not provide us with a very heavy storyline.  The plot is interesting enough to keep you engaged and the pacing never really drags even with the movie’s long duration. The premise was quite simple and best of it all, there were a lot of funny moments. I love the chemistry among the Guardians, and I loved Baby Groot’s very cute and adorable behavior. I also loved the opening sequence which formally introduced us to this new and welcomed version of Groot.

The film centered around the family theme, with Starlord finally meeting his father of course, but it also went much deeper than that with his adopted father Yondu stepping up to the plate several times throughout the film, and Michael Rooker’s performance as Yondu perhaps was the highlight of the film if you had to pick just one.

I also liked the bickering and bantering between Rocket and Starlord after Rocket landed the group in hot water, which was the catalyst for the entire plot of the film, with the group trying to get out of the mess that Rocket has made for them. 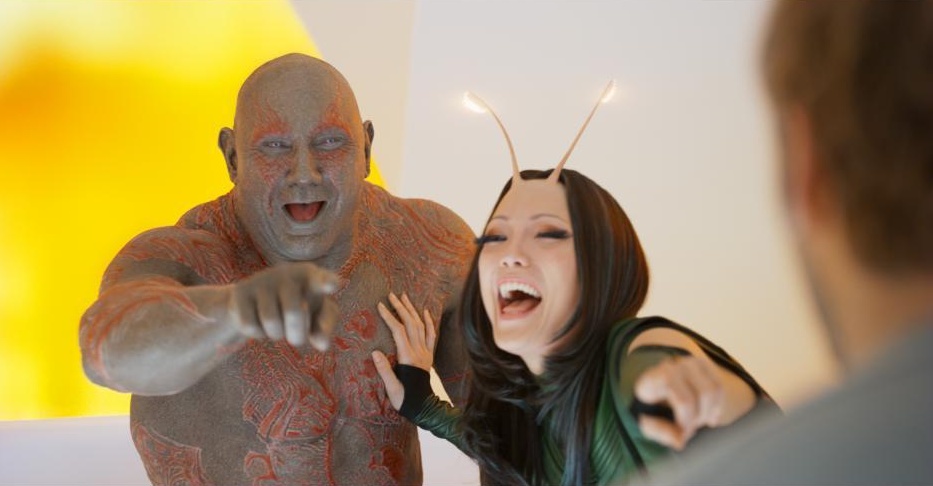 The addition of Pom Klementieff’s Mantis character was fun to see, especially whenever she was interacting with Drax. In this sequel, it was also surprising to see Drax was given a very funny characterization and his comments. There was even a surprise new character played by Sylvester Stallone whom I understand would be having a larger role in future Marvel movies.

I personally felt that this movie was better than Volume 1, in term of the story and characterizations. And for those of you who knew that Marvel’s movies would have some end credit scenes, better wait till the very end, since this film has got not 1, not 2 not even 3, but 5 post credit scenes altogether.

Guardians Of The Galaxy Vol.2 is freaking good from the very beginning till end! If you like the first chapter, then you’ll definitely love Volume 2. The relations between every character evolve and every one of them got a special moment in the movie.

Phase 3 of MCU is off to a very strong start, first with Civil War, then Doctor Strange and now Guardians doesn’t disappoint at all.

ABC is Bringing 'American Idol' Back

A new poster for the Finding Nemo sequel, "Finding Dory", has been released.
byStu Greenfield

Our favourite Ghostbuster comes to Netflix with his own brand of festive cheer in ''A Very Murray Christmas'', and he brought some friends along too.
byStu Greenfield