Former CEO of FOX News, Roger Ailes has died at age 77. His wife confirmed the news this morning. Ailes stepped down from Fox amidst a nasty sexual harassment scandal last year.

Former CEO and creator of FOX News, Roger Ailes has died at age 77. The last year has been extremely tumultuous for the aging Ailes, who stepped down from his position at FOX News amidst sexual assault allegations in July 2016.

Ailes wife of 19 years, Elizabeth Ailes, confirmed the media mogul’s passing via twitter at approximately 8:30 Thursday morning. What’s weird, as many of us who love conspiracies tend to notice, is the date on some of the articles announcing his death. Quite a few show that the articles were posted yesterday, the dates are clearly marked when an article is created… Some of the articles show the 17th ( Wednesday) in the url but clearly say he died Thursday. 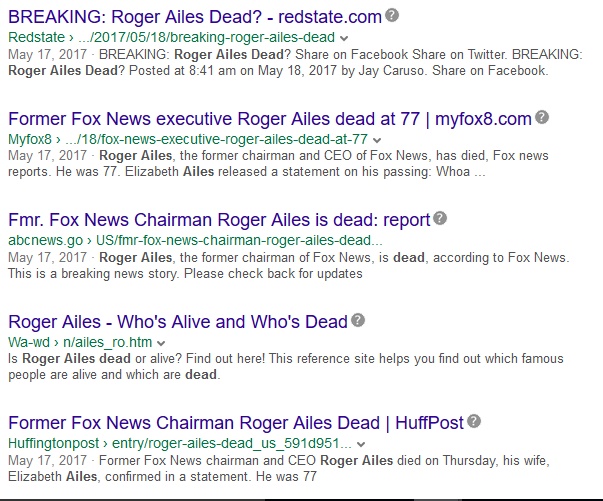 Most notable for his creation and work under the Fox News umbrella, Ailes had his hands in many pots. Though not a politician himself, he was the man behind many of our leaders. Roger Ailes was a media consultant for former presidents Richard Nixon, Ronald Reagan, and George H.W. Bush. Ailes was also an adviser to Donald Trump’s 2016 presidential campaign.

In 2014, Ailes was first rumored to have made sexual advances towards a producer in the 1980’s with the revelations revealed in a book written by Gabriel Sherman. Last year when Gretchen Carlson made claims of sexual harassment, Ailes vehemently denied any wrongdoing on his part. Three days after Carlson said she was fired for rebuking Ailes advances, Sherman released the stories of six women who claimed to have been harassed by Ailes.

Ailes stepped resigned and left FOX after the flood of allegations and the ensuing scandal, claiming he didn’t want his personal issues to be a distraction.

At this time, there is no reported cause of death as Ailes death is breaking news. When cause of death or contributing factors are released I will update this story.

Brian Kilmeade Of Fox News Vs. A Sixth Grader Is The Most Insightful Battle You’ll See On Cable News Today