Charleena Lyles was Killed by Police for Playing Russian Roulette with Her Family’s Lives. Don’t Make it Racism.

Charleena Lyles' death at the hands of Seattle police should be a cautionary tale to families of the mentally ill. Get them help, before they're a hashtag.

a Vigil for Charleena Lyles

Black social media is in an outrage over Charleena Lyles, another Black woman who was shot by the police. I think Black social media needs to get its life together. I am so angry I have to write this article. Last year, I had to take the time to write an article pointing out that every police-involved shooting is not murder. 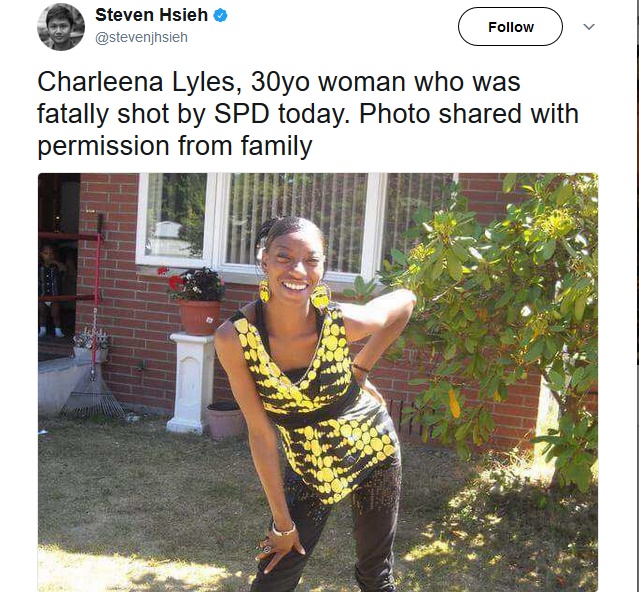 I can’t believe I have to say it again. In today’s climate, while many see the blatant wrong behavior of the now deceased, we actually have people saying cops should not shoot ARMED people. Let Me tell you something, Black or White, Native American or Latino, when you brandish a weapon at a cop, you put a target on ALL of our backs. I will not defend you, I will not shed one precious tear. I reserve those for the many, many, unarmed civilians who die at the hands of those paid to “serve and protect.”

As in the case of Korryn Gaines, who sat with her son in her lap, pointing her gun at police officers for HOURS during a standoff, some people deserve to be shot by the cops. That’s what leads us to today, and my reason for this article.

On Sunday, July 18, 2017, Charleena Lyles was shot by Seattle, Washington police officers in her apartment. News reports show that 30-year-old Charleena Lyles was home with three of her children and pregnant with her fifth when she called the police to report a suspected burglary. The police officer’s body cam footage confirms the officer and Lyles exchanged dialogue about a missing X-Box just before the officer is heard ordering Lyles to “back away.”

The police reports then state that Charleena Lyles was brandishing a knife. Her family is in an uproar asking why didn’t the police tase her? They have social media in an uproar because this 100lb pregnant woman posed no real threat they say. “Why couldn’t they have Tased her? They could have taken her down. I could have taken her down,” Monika Williams, Lyles sister exclaimed after arriving on the scene of the shooting.

Let Me tell you what is being left out of the story.

Exactly as in the Gaines case, Charleena Lyles was known to the police. Just like Gaines, Charleena had recently had a run-in with police. In fact, she had just been released on conditions, one of them being that she seek mental health treatment, June 14th, just days before her death. Why was she arrested? Police were dispatched to her home for a domestic disturbance. Charleena Lyles refused to comply with officers , this time she had a pair of scissors as a weapon. She was charged with obstruction and harassment.

Of that event, Monika Williams, Charleena’s sister says “She didn’t charge nobody or nothing,” as if that should absolve Lyles from blame.

When the call from Charleena Lyles apartment came through Sunday morning, it wasn’t taken like any other suspected burglary charge. Instead of the customary one officer, two were sent because of her prior interaction with officers. Her calls were flagged with “hazard information” affiliated with her apartment that “presented an increased risk to officers.” The officers spoke about her mental state and how she tried to hold officers in her apartment before. She also claimed that she and her daughters would turn into wolves.

Not only did Lyles’ own previous interaction with officers cause this “flag” but Charleena Lyles lives in an apartment building used to house those who recently transitioned out of homelessness.

Dashcam audio picked up the officers speaking while en route to the apartment. The officers, not yet identified, spoke about a woman who had previously made “all these weird statements.”

It’s highly likely that at least one of Lyles children witnessed the shooting. A neighbor, Lhora Murray says that after the shooting, police handed her two of Lyles’s children, a 10-year-old and a toddler. “They shot my mom,” the 10-year-old told Murray.

Let me tell you something, no matter how small a woman is, whether she is pregnant or not, is not a reason she can wield a weapon at police officers. People like this are what makes it hard on us all when interacting with the police. I am legally mentally ill and that mentally ill pass doesn’t even fly with me. There are levels of mental incompetence and if anyone in her family thought she was in such a bad state, why was she allowed to have her children at home alone? If you tell me a mentally ill person is well enough to care for her kids then don’t tell me she’s too crazy to know not to pull a weapon on police.

It’s obvious she wasn’t a threat at first or the officers wouldn’t have calmly been talking about a missing x-box. Officers asked for permission to enter the apartment, which was recorded on audio. Lyles, calmly explains to the officers that she left her door unlocked while she ran out and when she returned the X-Box was missing. Family members have told reporters that Lyles was afraid that the authorities would take her children, including one who suffers from down syndrome. She exhibited no signs of fear while talking to the officers. These officers spent 3 minutes with the woman before she grabbed a weapon and they kept saying “Get Back.” You can CLEARLY hear her aggressively call the officers “mother*ckers” moments before she is shot.

Listen to the audio.

It’s true that Seattle police have been accused of being biased and exerting more force than needed, especially in cases of mental illness and substance abuse involved. In fact, Seattle has been under federal decree and monitor since 2012 when Department of Justice investigation found the evidence of bias and excessive force.

That makes it even more imperative that people like Lyles do not have weapons when approaching police and that we stop downplaying these events. If we know someone suffers mental illness, we must do all we can as family and friends to make sure they are getting the treatment they need to not be a threat to themselves or others.

This could have turned out a lot worse, those innocent children could have been harmed. I won’t be shocked when this shooting is marked as justified. I also am not going to march or hashtag her name as I see Black social media pushing for. Instead, I’m going to use her story as a reminder that people who suffer mental illness, like myself, sometimes need people to step in and check us or get us help if they can’t.

Maybe if the family had made she got the treatment she needed she’d be alive now. I don’t know why so much anger is being thrown towards the officers. They want to go home alive and unharmed every day. There are plenty of bad cops out here and I want each off the street. I will not slap the title bad cop on a cop who is actually in fear for his life.

If you pull a weapon on a cop, they have a reason to shoot you. I’m not here for the comparison and stories of who else pulled a weapon and lived, that’s Russian Roulette, some live through the game some don’t. No one blames the gun so don’t blame the cop.