The name is Mike Shinoda. You may know him as the rapper of one the best-selling rock music acts of the 21st century, Linkin Park. Alongside lead singer Chester Bennington, he provided the rap (and sometimes singing) verses in some of Linkin Park’s most notable hit singles, like ‘In The End’, ‘Faint’, ‘Somewhere I Belong’, or ‘Burn It Down’. Apart from being the rapper and occasional second singer of the group, he was also the guitarist, keyboardist, songwriter, and producer.

Even though ‘Post Traumatic’ is labeled as Shinoda’s first solo debut, his actual first solo tryout was his side project Fort Minor, most notable for the 2006 hit single ‘Where’d You Go’ featuring Holly Brook (now known as Skylar Grey) and Jonah Matranga, the lead singer of rock group Far. The song peaked at number 4 at the Billboard Hot 100 and may be considered his biggest success outside of Linkin Park. This time around, there are no side projects, aliases or reinventions, but simply just Mike. 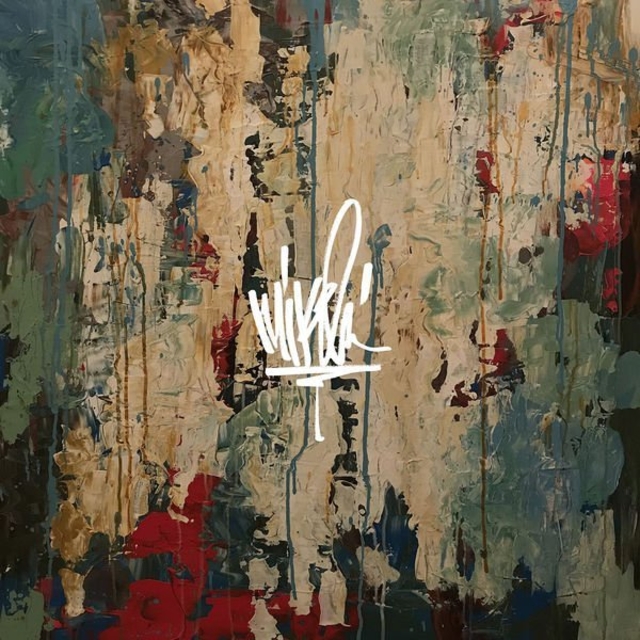 The creation of the album is very much linked to Chester Bennington’s suicide and death on July 20, 2017, when Linkin Park was just in the midst of their One More Light World Tour in support of their seventh studio album of the same name. All tour dates after his death were cancelled, but on August 22 of that same year, the band members announced a tribute concert at the Hollywood Bowl. The tribute took place on October 27, 2017, and featured various artist, including Blink-182, Korn, Alanis Morissette, Zedd, and many others. It was livestreamed on Youtube and a great success. But the question remains, what will the future hold for Linkin Park?

Listening to the album, Mike’s answer to the question is only one: I don’t know. The grey zone. Track 2, ‘Over Again’, addresses the struggle: “It was a month since he passed, maybe less, and no one knew what to do, we were such a mess”. The lyrics later on continue more directly: “And everybody that I talk to is like ‘Wow, must be really hard to figure what to do now’ – Well thank you genius, you think it’ll be a challenge, only my life’s work hanging in the fucking balance.”

The future of Linkin Park is unknown for now. But it didn’t stop him to continue making music. So why now bringing out music on his own? Especially almost a year after Bennington’s death.

Shinoda addresses the why on his solo project during an interview on Sway’s Universe: “I couldn’t stay out of the studio […] I was just making stuff to get it out of my system, you know, regardless of putting it out or whatever. And eventually I had enough stuff where I started to kinda leak out a couple songs here and there, and I put out three songs…” (Post Traumatic EP – released January 15th of this year – the songs are all included on the new album) “…those were the darkest ones, ‘cause they were the earliest ones. [The album] it’s not all as dark as that first stuff, but definitely for me I was just writing the things that I was thinking, the things that I was going through. It helped me get through it, it helped a lot of the fans understand where I was at. It helped them to get through it. It’s been a good ride though.”

The first single release, ‘Crossing a Line’, is self explanatory about taking a big step on his own, as the lyrics go: “They tell you I don’t care anymore, and I hope you know that’s a lie, ‘cause I found what I have been waiting for, and to get there means crossing the line.” Most of the album’s lyrical content is the struggle. The struggle after Chester’s passing, the struggle to grief, the struggle to continue on. ‘Running from my Shadow’ (feat. Grandson) addresses the hopeless moments: “There are times when I kick myself, say I’m not sick but I can’t get well, say I got this while I chase my tail, as if they can’t tell.”

Throughout the album, listeners get an inside look of Shinoda’s thoughts and feelings. Putting the persona as a lone wolf, walking a path of his own, and facing his demons by himself. His paths are accompanied by electronic hip hop beats with some rock influences. You might say some tastes of Linkin Park or Fort Minor (similarities to single ‘Welcome’, released in 2015), even though the body of work represents the rebirth of an artist on an individual road. The album starts off with sadness, especially on openener ‘Place to Start’ which features voicemail recordings of friends and family of Shinoda, giving their condolences after Chester’s death. The tracks thereafter carry an angry and hopeless vibe, but eventually turn hopeful and more uplifting. Like in ‘Ghosts’, the tenth track on Post Traumatic, which was released prior the album with a sock puppet video, to bring more fun into the project.

Honestly speaking, even though the 16-track album is full of cool urban beats, some of the tracks sound a bit repetitive. Mike’s rapping however, holds the same good quality as in the height of his Linkin Park days. Mike did good, and even though the future is uncertain, the journey goes on.

The album is out now in stores, digital outlets, and everywhere music can be found.

About You (feat. blackbear)
Make It Up as I Go (feat. K.Flay)
World’s on Fire
Crossing a Line

All tracks are written and produced by Shinoda, with 4 in collaboration. ‘Post Traumatic’ is promoted with eight music videos released prior to the album release. The visuals are mostly in home video style, as this way he felt a closer connection to the fans. You can watch one of them, ‘Nothing Makes Sense Anymore’, down here:

Brockhampton’s ‘Last Album’ Decision Is Explained By Kevin Abstract: ‘We All Love Each Other’

Due To Health And Safety Protocols, Caris LeVert Would Miss The Pacers’ Play-in Game Against The Hornets

In An FX Documentary, Rob McElhenney And Ryan Reynolds Will Chronicle Their Attempt To Run A Soccer Team

Since Surrendering To Police, YFN Lucci Is Back In Custody

Brockhampton’s ‘Last Album’ Decision Is Explained By Kevin Abstract: ‘We All Love Each Other’

Due To Health And Safety Protocols, Caris LeVert Would Miss The Pacers’ Play-in Game Against The Hornets

In An FX Documentary, Rob McElhenney And Ryan Reynolds Will Chronicle Their Attempt To Run A Soccer Team

Since Surrendering To Police, YFN Lucci Is Back In Custody

Lamar Odom Shares The Substance He Uses To Remain Sober