It seems just like yesterday when Ariana Grande was known for being the funny but scattered red-haired Cat Valentine in Nickelodeon’s teen sitcom ‘Victorious’. Playing the best friend of high school buddy Tori Vega (Victoria Justice), the show ran from 2010 till 2013, with Grande reprising her role in a spinoff with iCarly’s Sam Puckett (Jennette McCurdy) in ‘Sam & Cat’ for one season, from 2013 till 2014. Grande’s musical career, however, already started during her Nickelodeon days, being part of the Victorious Soundtrack, and in 2011 releasing her first solo single ‘Put Your Hearts Up’, a bubblegum pop track that samples 4 Non Blondes’ ‘What’s Up?’. As she loves to mention that she ‘hates that song with a burning passion of a thousand suns’, a planned album with similar teeny pop tracks was eventually scrapped, as she wanted to take her artistry to the next level. Stepping away from her teen persona, she incorporated R&B in her first studio album ‘Yours Truly’ in 2013, including top 10 hit ‘The Way’, featuring Mac Miller. Her soulful vocals and music were often compared to Mariah Carey and gave her credibility from critics.

Her debut album was her step in the game, but 2014’s ‘My Everything’ was even a higher peak in her musical career, as four singles of the aforementioned album hit the top 10 charts – ‘Problem‘, ft. Iggy Azalea (#2), ‘Break Free‘, ft. Zedd (#4), ‘Bang Bang‘, ft. Jessie J & Nicki Minaj (#3), and ‘Love Me Harder‘, ft. The Weeknd (#7), with her fifth single ‘One Last Time‘ peaking at #13. Her third album ‘Dangerous Woman’ was a success as well, with the soulish lead single of the same name made her artistry even more solid than before. The unfortunate terrorist bombing at the end of the Manchester Arena show of her Dangerous Woman Tour in 2017, in the foyer area where twenty-two people were killed, was a horrific moment. A big shock for the people and Ariana, who two weeks later played a benefit concert for the victims called ‘One Love Manchester’ with other artists for support, including Miley Cyrus, Little Mix and Robbie Williams. Now, a year later, her fourth album ‘Sweetener‘ is out, marking a return for Ariana, and a new restart. 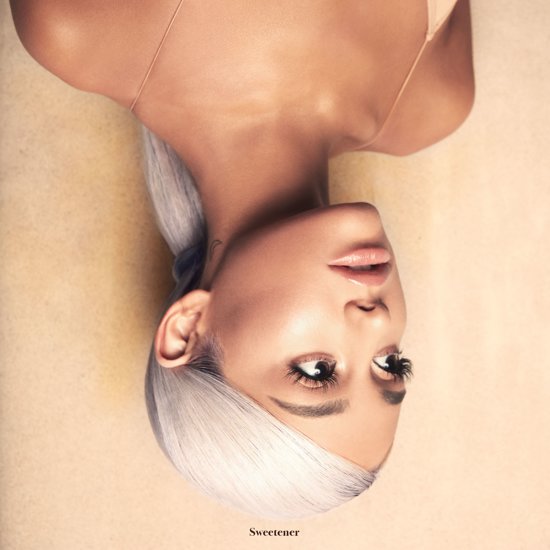 Maturity is definitely pouring out of the album. Most of the tracks do not focus on being a next big hit, but rather expose a sensual and dreamy side. With soothing vocals, she opens up the album with an acapella introduction ‘Raindrops (An Angel Cried)’ and continues with smooth urban vibes in ‘Blazed’ – featuring Pharrell Williams – who in between puts vocal lines to spice up the funky track. Pharrell produced half of the record, and his influence is definitely hearable, as certain melodies and vocal/lyrical structures are reminiscent to Pharrell’s early work with either his band N.E.R.D., his production team The Neptunes, own tracks, or songs he created for other artists. Just like ‘The Light Is Coming’, featuring Nicki Minaj, that got some vibes of Pharrell’s work with Gwen Stefani on her hit albums ‘Love. Angel. Music. Baby.’ and ‘The Sweet Escape’ (2004, 2006). Drums and synths with a jittery beat and repeating samples create one of the more impertinent tracks on the album. Clicking sounds, a typical Pharrell flavored trademark, marks a comeback here (notable for N.E.R.D.’s ‘Lemon’, featuring Rihanna, 2017).

Other Pharrell-produced tracks on the album, like ‘R.E.M.’, and the title track ‘Sweetener’ are more bubbly and, as it suits the album title, sugary sweet. Pharrell exclaims a ‘sheesh!’ between the lyrics, and gives the title track a little extra. ‘Successful’, another one created by Pharrell, makes some nice creative touches by adding steel drums an some Motown vibes.

Missy Elliott makes a guest appearance on ‘Borderline’, a treat for Missy fans as Pharrell already worked with her on Elliott’s 2015 single ‘WTF (Where They From)’. Other tracks of the album are produced in collaboration with Swedish producers and songwriters Max Martin and Ilya as well as three Tommy Brown productions, and switched up the R&B flavored half of the record with dance-pop tracks – in a relaxed, dreamy and cloud-filled nature. Like ‘Everytime’, and Imogen Heap-cover ‘Goodnight n Go’. Producer Hit-Boy channels the direction with ‘Better Off’: A calm, sensual, romantic and sexual nod of a 90s Janet Jackson track. Contrariwise, dance-pop track ‘Breathin’, produced by Ilya, gets more sincere as Ariana addresses anxieties and breath control problems.

Music Video for Lead Single ‘No Tears Left to Cry’

The first and second single, ‘No Tears Left To Cry’ and ‘God Is A Woman’ are hidden within the tracklist, as the former is track number 10 and the latter track number 5, and may have been intended to make listeners listen to the complete art of work instead of only focusing on the singles. The lead single is a typical modern midtempo dance-pop track, produced by Martin and Ilya, while solely Ilya-produced ‘God Is A Woman’ follows a similar route, but mixes up the track with trap sounds and smooth guitar in the background – while finishing off with a choir. The album comes to an end with 1:13-minute outro ‘Pete Davidson’. A romantic ode to her fiancé, as Grande is known to tie in her romantic interests in her music, like former lovers Mac Miller and Big Sean. The album finishes off with ‘Get Well Soon’, another one of Pharrell’s, which is lead by a piano with breathy, emotional and soulful vocals by Ariana (style-wise reminiscent to Bruno Mars), while the Japanese version of ‘Sweetener’ adds instrumental versions of ‘No Tears Left To Cry’ and ‘God Is A Woman’ as bonus tracks.

Music Video for Second Single ‘God Is A Woman’. All videos were directed by Dave Meyers.

In ‘Sweetener’, Ariana Grande sounds more grown than before. Her unique soprano vocals set her apart from other female singers from the 2010s. The soothing and dreamy vibe makes a listener close their eyes while laying back enjoying the floating of the music. Producer Max Martin, who has a countless résumé of hit songs, did put some effort into finding a different line in his sound with Ilya. Pharrell, on the other hand, used more of his familiar signature sounds. Some of his earlier productions could have been a fit for ‘Sweetener’ as well. For example, ‘Why Should I Be Sad’, a track he produced for Britney Spears’ 2007 album ‘Blackout’, would be able to match in Sweetener’s tracklist in style and composition. Nonetheless, Pharrell’s influence in Ariana’s fourth album leaves a strong mark in a positive way. As a whole, ‘Sweetener’ is mature but still fun, varied but still knows which direction to go. And, of course, vocals are on point. That’s for sure.

‘Sweetener’ was released on August 17, 2018. It debuted at Number 1 on the Billboard Charts. Most recently, Ariana Grande performed ‘(You Make Me Feel Like) A Natural Woman’ on Aretha Franklin’s funeral on August 31, 2018. You can watch her performance here:

Deon Taylor, The Director Of ‘Fatale,’ Has Teased A New Project With Nicki Minaj

In ‘Don’t Look Up,’ Ariana Grande And Kid Cudi Do A Fantastic Rendition Of ‘Just Look Up’

On ‘Just Look Up,’ Ariana Grande And Kid Cudi Are Majestic And Captivating