The importance of Social Media in a modern world.

When one thinks of, “Social Media,” often it conjures up images of hordes of angry Twitter users or juveniles posting videos of themselves eating Tide pods on Instagram. While perhaps these are valid reasons to worry about the state of humanity, they are not necessarily reasons to disparage social media itself. Indeed, despite its reputation as the bathroom-wall of our society – it could be one of the most significant advancements in self-governance we have seen for decades.

This, of course, is an absurd claim to some, who don’t see how medians full of lewd photos and bigotry could be useful to our Republic. However, one must consider how exactly how our governance system works. The Merriam-Webster dictionary defines a Republic as,

In developing the representative system, we now have, the founding fathers had to ensure that the wants of the public were best translated to the nation at large through a system of electing politicians who would represent the desires of their constituency in government. Social Media, however, has allowed the public to express their views on an international forum directly to each other and their leadership. None of the Founding Fathers could have imagined this instant-contact by the American population to their representatives. The very idea that one could send a message to their President on a whim, and interact with others doing the same would have been a far-flung notion just two decades ago, but Twitter has made it possible. It’s not just the people that can communicate their thoughts, but the President can too. Whether you love or hate the current holder of the Executive office, Trump’s heavy use of Social Media is likely to remain a component of future Presidencies.

That is not to say there are no apparent problems with the current state of social media, in fact, a fairly heated debate over censoring controversial figures online is ongoing. In a similar vein, there is a discussion over the ethics of allowing massive companies to control social media’s inherent power to influence culture and government, and whether or not these companies are verging on being monopolies. Further, the problem with the rampant decadence on social media platforms, whether it be extreme vulgarity or widely-distributed falsehoods, has some suggesting that companies like Facebook should be regulated.

Of course, these debates are only natural. Many times, technology advances faster than our ability to adapt to it, and as a result, we must go through a period of debate on how to set up the rules. Some react to this wild new frontier with fear and call for the regulatory measures mentioned previously. Others, see it as a crazy, passing fad and generally ignore it – others find it a morally irreprehensible place and something to be avoided at all costs.

Despite the nay-saying of its critics, Social Media is here to say and will serve as a vital tool for the advancement of our civilization. By way of the efforts of massive corporations like Facebook and Google, billions of people around the world now can communicate on the fly, making their desires known to their respective governments known. As we move forward, we will continue to refine this process and Social Media will continue to play a bigger role in life and politics.

Author
Johnathan Jett
My name is Johnathan Jett, I am a twenty-year-old student, Warehouse worker, and stock market investor extraordinaire. My interests Include politics, philosophy, science, and technology. I write the occasional article for the American Thinker when a topic jumps out as important to the national cultural/political discussion.
Previous Article 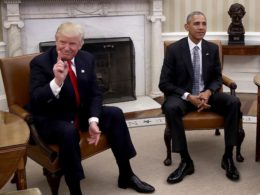 Trump Accused of Suppressing the Vote By Obama With Compromising U.S. Postal Service Amid Renewed Reliance on Mail-In Voting

The USPS has been criticized over major mail delays nationwide over the past few months following significant operational changes made by the new Postmaster General Louis DeJoy, a businessman who has been a major fundraiser for Trump in the past.
byBien Luigi

Elisabeth Hasselbeck: Why Hasn’t #BlackLivesMatter Been Labeled a Hate Group

Elisabeth Hasselbeck thinks #BlackLivesMatter is so dangerous that it should be classified as a hate group.
byBrennen Jones

How our "communities" have turned into "neighborhoods," and we may never be able to turn it back to the way it was.
byTroy Patterson