Most people are aware that algae, moss, mold, and lichen each have the ability to pose a threat to not only humans’ health, but also animals’ lives and the lives of the objects that they thrive on.

Most people are aware that algae, moss, mold, and lichen each have the ability to pose a threat to not only humans’ health, but also animals’ lives and the lives of the objects that they thrive on. Algae, moss, mold, and lichen thrive on various materials, including residential and commercial buildings, pools, rivers, decks, and other environments that have the ability to hold moisture. Other than a basic knowledge, not many people are familiar with all of the negative effects that algae, moss, mold, can have on our health. Here are the least talked about health risks that they pose on humans.

More Common Than You Think

One of the most common misconceptions about algae, moss, mold, and lichen is that they are rarely found in residential areas, and that they’re only found in wooded areas. These plants are becoming more populous with time because of the changing climate around the world. Warmer climates create more moisture in the air, which results in certain areas becoming more moist. Moist and damp areas are breeding grounds for moss, algae, mold, and lichen. Once these plants have taken up residence on certain objects and in certain areas, they have the ability to grow twice their size in short periods of time.

Algae are aquatic organisms that have the ability to conduct photosynthesis. They lack a vascular system, meaning that they don’t have roots, stems, or leaves like other plants do. And they exist in single cells that are microscopic. There are multiple forms of algae, including seaweed, pond scum, and algal blooms. However, algae has the ability to pose as a severe threat to not only animals but also humans.

There are certain forms of algae that pose severe threats to humans and animals. More specifically, some algal blooms release dangerous toxins into water, not only killing the aquatic organisms that reside in that water, but also harming humans who unsuspectingly swim in algae-infested waters. If the water is tested before human consumption, then certain algal blooms still pose a threat to our health because that water has to be treated. Certain forms of algae known as Cyanobacteria negatively affects humans and animals because it releases harmful toxins into the water that it resides in.

Moss is a plant similar to algae that is classified as non-vascular, which means that it doesn’t have real roots. Moss has the ability to grow on multiple objects and in various locations, ranging from rocks and logs to roofs and carpets. It reproduces when the spores of the plant are released from capsules. There are more than 12,000 different species of moss throughout the world, including sheet moss, fern moss, cushion moss, hair cap moss, and rock cap moss.

Moss is problematic because it gains its nutrients from the object that it’s residing on. Because of this, if moss is on a building or a roof, the color of that building or roof will begin to disappear. Additionally, moss attracts worms, bugs, and rodents that can also pose a threat to the building or other type of object that it resides on. Furthermore, moss poses a health risk to humans because it increases not only allergies, but also the release of toxic compounds into the air.

According to Mold Advisor, mold is a fungus that has the ability to grow in multicellular filaments, which are called hyphae. There are multiple types of mold that differ based on where and how each type grows. Some different types of mold include aspergillus, penicillium, and cladosporium. Mold poses various negative health effects to your body. And since mold spores can become airborne, the spores can be easily inhaled by not only humans, but by animals as well. Mold releases harmful toxins into the air and causes respiratory problems for affected individuals, including asthma.

Lichen is a non-vascular plant that has no roots, stems, or leaves, unlike most other plants. They have the ability to grow slowly, and they’re usually found on rocks, walls, trees, and even in water. There are three main types of lichen, including foliose, fruticose, and crustose. Lichen typically arises from algae and is in the algae plant family, but it can affect people and animals, and it’s usually harmful when it arises from Cyanobacteria, which is a type of algae.

When lichen forms from Cyanobacteria, it then becomes harmful to humans and animals because it releases harmful toxins into the air and water, known as microcystins. When these toxic chemicals are released into the air and into water, they not only negatively affect the animals living in those aquatic environments, but they can also be ingested by humans, which can also cause harm.

Although algae, mold, moss, and lichen grow in different locations and pose different threats to humans and animals, it can be difficult to distinguish between the four different types of plants. Here are identifying characteristics that are often associated with each category.

Can be a flat or bumpy texture containing spores

According to Seers, pressure washing is a particularly good method for cleaning grime off stone walls, although it does have other applications as well. Such examples include garages, trees, decks, and wood floors. However, if you don’t have a pressure washer, then you may also use a high-powered hose in addition to protective gear in order to get rid of the algae, mold, moss, or lichen from whatever object that’s negatively affected by the plant or fungus.

Once you realize that you have harmful algae, mold, moss, or lichen negatively affecting your home or another object of yours, stay away from the plant or fungus. Avoid coming into contact with it until you seek a professional that can test the plant for toxins and possibly even clear the fungus away for you in a safe manner.

Seek out professional help in order to test a sample of the substance and find out if it releases toxins in the air. If it is toxic, you can either consult with a professional cleaning company to remove the plant, or you can take care of the problem yourself with a pressure washer, if the problem plant is outside. This is going to be a necessity to not risk your health. If you’re interested in similar articles, be sure to check out our health section here!

Doctors reported that a Bronx man is suffering from a rare condition where his penis is turning into bone.
byTUT Staff

Treatment of Constipation in Young People

He said he did nothing different during that time. He wore a mask, practicing social distancing, and only visited places that were absolutely necessary.
byBien Luigi 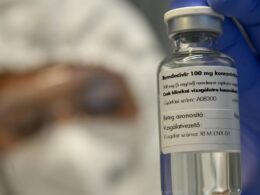 Remdesivir was used to “treat” President Donald Trump when he was hospitalized for three days earlier this month after testing “positive” for the virus.
byBien Luigi