A cause of death has not been announced as a message continued to ask for the family’s privacy during this difficult time.

Prayers are now sent to the loved ones of popular YouTuber Nicole Thea. Nicole unfortunately passed away on Saturday at the age of 24. It was also revealed that her unborn son, Reign, passed away as well during the announcement of her passing.

Nicole’s mother took to her Instagram account on Sunday to convey the news to her followers. In the message, she said, “To all Nicole’s friends and supporters it is with great sadness that I have to inform you that Nicole and her son she and Boga named Reign sadly passed away on Saturday morning.”

She further announced that Nicole’s pre-scheduled videos will still be released. The message continued, “Also Nicole pre-schedule a few YouTube videos, and Boga has made the decision to allow them to be aired.”

A cause of death has not been announced as the message continued to ask for the family’s privacy during this difficult time. Nicole had her own jewelry and eyelashes company aside from her popular YouTube videos.

She was also known for her dancing videos, she often danced with her partner, Global Boga, who is a member of the group Ghana Boyz.

A few days prior to the passing of Nicole and Reign, Boga showed his excitement for being a father on his Instagram page as he uploaded a video of him dancing to a Pop Smoke song with a baby stroller. In the video’s caption, he said, “If you believe children are BIG BLESSINGS from God drop some ‘Rrrrr.’ I can’t wait to take my son to the parks and playgrounds.”

We are sending our deepest condolences to the family of Nicole Thea during this time.

How To Choose an Online Casino in Europe for 2020

New pictures of the actors on set of the Amazing Spider-Man may show a major spoiler. Just a simple wardrobe choice could foreshadow a major characters death.
byEverick Davis Jr

Quentin Tarantino is being bullied by Police Unions over his participation in an anti-police brutality rally that was held in New York City.
byDeanna Brownen 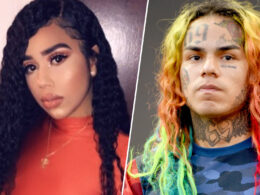 “All You Do Is Cap About Our Daughter”: Sara Molina Slams Tekashi 6ix9ine On Social Media As A Terrible Father To Their Daughter

During his trial, their relationship has always been filled with a variety of issues from the very beginning.
byBien Luigi