Recognizing and Acting On Brain Decline

Treating any medical illness first and foremost begins with identifying the initial signs of distress of those afflicted.…

Treating any medical illness first and foremost begins with identifying the initial signs of distress of those afflicted. This is especially true for cognitive decline, where recognizing the earliest stages of degradation can be a challenge unto itself. According to Neurologist Dr. Nissinen from the Kaizen Brain Center, “When we are talking about very early signs they can sometimes be hard to identify, sometimes the individual themselves will feel like something is changing, which we call ‘subjective memory complaints’ and that is actually a risk factor for developing a ‘true’ memory disorder.”

As such, this is the reason it is highly recommended to have a medical provider conduct Neuropsychological screenings for verification. This level of testing has the benefit of sensitivity, so if a medical provider feels that there may be a neurological disorder brewing, they can refer a patient for further testing.

One should consider that normal aging naturally leads to mild symptoms of cognitive decline. Upon further examination of these symptoms, it becomes clear there is a distinction between the cognitive decline in normal aging and that from a severe cognitive disorder. While overlap between symptoms do exist, their differences lie in their level of severity. For instance, an elderly person repeating a question, but quickly realizing they had already asked the same question is not immediately exhibiting signs of a severe degenerative brain disease.

Dr. Nissinen further adds, “It is normal that cognitive processing speed slows down as we age, so tasks may take longer to complete. Also, the capacity to maintain focus and attention diminishes such that multitasking becomes more difficult. There is often some difficulty with word retrieval, the most common complaint is with names, but again once the information is given, it is immediately familiar. Same if you can’t remember a word and someone gives it, then comes right back – whereas in a neurodegenerative order it may not, and the difficulty may continue to persist and get worse… It’s also important to realize that hearing loss can sometimes seem like a memory problem, since if you can’t hear the information, you will not remember it, so getting your hearing checked is important, and indeed untreated hearing loss is a risk factor for dementia.”

In the realm of dangerous neurodegenerative disorders, Alzheimer’s Disease remains among the most severe. The medical experts at the Alzheimer’s San Diego Foundation break down the deadly illness into multiple stages.

At this stage, those afflicted experience worsen memory loss including:

The spread of the disease now affects areas of the brain that control language, reasoning, sensory processing, and conscious thought:

At this stage, individuals with Alzheimer’s can no longer effectively communicate to others and are completely dependent on others for their care. As their time comes to an end, the body shuts down. Their symptoms often include:

Alzheimer’s Treatment: The Sooner, The Better

The classic hallmarks of memory decline as denoted in the aforementioned description of Alzheimer’s highlight the importance of early detection of the disease. The difference between normal aging and a brain disease is seen through literal life altering conditions. A progression from mild memory loss to having difficulty finding car keys to being unable to eat without assistance is an all too frequent, deadly occurrence in the elderly. Those affected may compensate for their cognitive decline through note taking, use of calendars, family members, and medication. However, as Dr. Nissinen concluded, “With all of these symptoms one needs to realize that it needs to be a change from prior level of functioning.”

For those worried about memory problems, they can start by taking the SAGE test (The Self-Administered Gerocognitive Exam)  which is a self-administered cognitive test. If results indicate something abnormal, please visit a physician for evaluation. https://wexnermedical.osu.edu/brain-spine-neuro/memory-disorders/sage.

For more information regarding Alzheimer’s Disease and how to best identify symptoms, visit the Alzheimer’s San Diego Foundation at https://www.alzsd.org/ and the Kaizen Brain Center at https://kaizenbraincenter.com/

5 Common DIY E-Juice Mistakes: Do This Instead 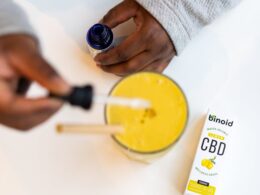 When is it Best to Take CBD?

For many people using CBD, it’s a lifestyle choice that they may end up using regularly. Therefore, it’s…
byTUT Staff

A group of Spanish experts state that bruises and lesions on the feet could be an early Coronavirus symptoms.
byBien Luigi

A Guide to Medical Cannabis Seeds

If you want to find out more about the existence of medical cannabis and understand who and how it can help, then you can be forgiven for being slightly confused.
byTUT Staff