Jill Scott really shined in this film. TWISTED GRADE: B+ Tyler Perry really outdid himself with his latest…

Tyler Perry really outdid himself with his latest movie, Why Did I Get Married, so much in fact that he turned me into a fan of this movie.  I already can’t wait for the DVD to come out and that’s a rare thing for me to say about a Tyler Perry film because it’s not like I’m one of his biggest fans.  But this movie was really really that good

I’ve seen Tyler Perry’s films before and I can see why people like them, but they never really appealed to me, because lets just say that I always went to see one of his films accompanying a female companion and I think that’s where his primary audience comes from.  There’s nothing wrong with that.  Shoot, LL Cool J has a 20-something year rap career still going on utilizing the same marketing strategy as Perry, but there was something different about this movie that made me see things a little bit more differently.

The first thing that pulled me in was the title. And it’s not because I’m married because I’m not, but it made me rephrase the title a little to fit my own perspective.

“Do I want to get Married?” and the answer is an emphatic “yes!”  So it already had me hooked. Even though I’m a single guy, marriage is something that I do feel strongly about and I was interested to see Perry’s view on something that I hold so sacred.  By having an open ended question as the title, it kind of made me think of all the different possibilities and avenues that this movie can take on marriage.  I know it sounds corny, but hey, that’s how my mind works.

Why Did I Get Married is an intimate story about the difficulty of maintaining a solid love relationship in modern times. During a trip to the picturesque, snowcapped mountains of Colorado, eight married college friends have gathered for their annual seven-day reunion. But the cozy mood is shattered when the group comes face-to-face with one pair’s infidelity. As secrets are revealed, each couple begins questioning the validity of their own marriage. Over the course of the weekend, husbands and wives take a hard look at their lives and wrestle with issues of commitment, betrayal, and forgiveness as they seek a way forward.

That pretty much sums it up in a nutshell without giving away any spoilers. This movie serves as a meditation for those troubled couples that are unwilling to do it for themselves.  It also tries to act as a mirror and reflect faults that maybe you couldn’t see yourself.  That’s this film’s biggest strength. To engage the audience with laughter and at the same time make us feel for the characters no matter how over-the-top their actions may be (i.e. the way Richard T. Jones character treated Jill Scott’s character), which is a common trait for Perry’s films.

There are always extremities involved in the makeup of Perry’s characters.  Either they’re too perfect or are down right nasty. There’s no in between. But what I found refreshing about this film, is that it does seem realistic even though at times some of the characters’ actions were laughable and implausible.

The highlight of the film to me was Jill Scott.  She did an extraordinary job with this film. She definitely deserves a standing O for this one and Janet wasn’t bad either and Tasha Smith was hilarious. Truthfully, the strength was definitely the female cast. They easily out shined their male counterparts, not to say that they were bad because the cast as a whole was excellent.  They all seemed to enjoy their time together on screen.

Another reason that this film is his best up to date is that he’s beginning to leave the theatrics at home. He’s beginning to deviate from “showing a play on the big screen” into “turning a play into a movie” and that’s showing growth. One of my problems with him before was that I went to the movies to see a movie and not a play and he struggled adapting his plays into movies. TP’s beginning to come into his own as a filmmaker.  He’s not just a playwright anymore.

This film is by far TP’s best up to date and I’ll leave it at that.  Best for you to see it yourself.

Have a Seat with Konan! 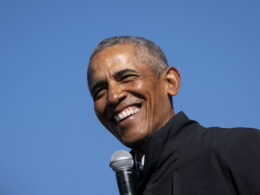 Barack Obama is a avid and audacious viewer of movies and TV. Unlike his inheritor Donald Trump, who…
byBien Luigi

Hugh Hefner, businessman, media and cultural icon, and original “playboy” has passed away. As the editor-in-chief and publisher…
byAshly E. Smith

Q&A: Natasha Wanigatunga is a Fashion Model Whose Runway is Living Positively

Winner of Miss Sri Lanka USA 2015, Natasha Wanigatunga is a fashion model that has done campaigns for brands such as Pop Sugar, Nº21, Nordstrom, and Aeropostale. On the acting side, Natasha is best known for her starring role in the indie film 'Act Drunk'.
byChristina Jeter