Kimora Lee has officially moved on from Russell.

Kimora Lee Simmons and her actor boyfriend Djimon Hounsou are reportedly married, and have been so since last summer, says reports.

However, according to New York’s Daily News, their wedding may not have been legally binding.

A source told the paper that Kimora and Djimon wed over the summer during a trip to to his native Benin, Africa. But, since Kimora was still technically married to mogul Russell Simmons, they couldn’t make it official in the U.S.

Her divorce to Russell was finalized at the end of January.

“Both Kimora and Djimon wore traditional dashikis,” the source said. “She went whole hog with the African theme — there were African drums, a traditional ceremony with dancers … they even had a hut.”

Those in attendance included Kimora’s daughters Aoki and Ming, as well as a nanny and photographer.

“Aoki slept through the entire ceremony, and Ming cried. They were pretty confused as to what was going on,” the source explained to the paper. The two girls like him although he’s not their daddy.

No word as to when they will become official. Kimora is currently pregnant with Djimon’s child.

RiRi's Back in Studio! 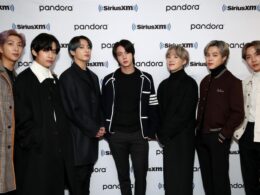 Stacey Dash Says She Is Ending Her Fourth Marriage

The couple had some marital woes in September when Dash was arrested on a misdemeanor charge of domestic battery against Marty.
byBien Luigi

Due to a rule violation involving caffeine supplements, recently kicked off contestant Ruben Studdard will be back on "The Biggest Loser". He has reportedly lost over 100 pounds since being on the show.
byBrennen Jones