Rumor has it that Jay-Z and Beyonce turned down $14,000,000 just to be able to release these pics to their fans for free…through Tumblr.

Beyonce and Husband Jay-Z haven’t had a rest from the tabloids since she announced at the VMA’s during her performance that she was pregnant with their first child.   And then she finally had that baby and people around the world waited anxiously for the first glimpse of Baby Blue Ivy Carter.

And then around 7:00 eastern time last Friday twitter was in full effect about the release of Blue Ivy Carter photos.   Beyonce and Jay-Z released these photos themselves through their Tumblr account and reportedly turned down $14,000,000 just to be able to post them to Tumblr for free.

Don’t know if the last bit is true, but regardless it is definitely a good PR move on their part.

Author
Lexus Wheeler
I am an Alumni of Norfolk State University where I studied Journalism. Class of 2012. I am a New York native for Haverstraw, New York. I now reside in the state for lovers.
Previous Article

The 3rd and final installment in the 'Hangover' series went away from their usual formula but it works.
byEverick Davis Jr
Read More

When's the last time you wore overalls? After seeing these styles, you may ask yourself "when's the next time" you plan on wearing them.
byLisa Tran 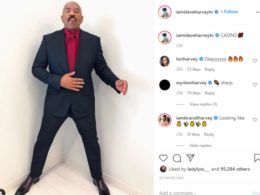 Steve comes from humble beginnings and was even homeless during the beginning of his comedy career.
byBien Luigi