Kendrick Lamar is Great for Hip-Hop!

Kendrick Lamar is coming for all you rappers out there.

Last night Big Sean decided to drop a track that didn’t make the cut for his album because of sampling issues. He said it wasn’t a radio song and boy was he right. Big Sean did his thing on “Control” but the show was stolen by Kendrick Lamar. I feel bad for Jay Electronica for having the third verse because Kendrick pretty much killed it.

What I liked so much about the verse was how Kendrick called out his competition in a classic way. Instead of the normal “dissing” that most rappers do, Kendrick just simply named the artist he saw as competition and told them watch your back because I’m coming for all of you. This is great because now it’ll push other artist to show up and come with there best verses. With some of the garbage that comes on the radio these days, some rappers need to be called out. It’s tiring of hearing the older rappers (ex. Jay-Z, Nas) call out new rappers. I understand they’re some of the greatest but  I think it’s time for the artist of this generation to check themselves.

Kendrick Lamar has come out and proved that you can be successful without selling your soul to the devil. He makes real music that’s so much different from the mainstream of today. At the same time he can still come and rhyme with mainstream rappers and deliver. His albums have been legendary and he’s just getting started. If any rapper from this generation is gonna go down as an all-time great, it’ll be Kendrick Lamar. If anybody else wants to join him they should accept his challenge and step their bars up!

Check Out “Control” and see what I mean:

Reports show that beauty mogul and reality star Kylie Jenner, 22, and Houston rapper Travis Scott, 27, have officially rekindled their romance after being recently seen back together and booed up at events.
byBien Luigi 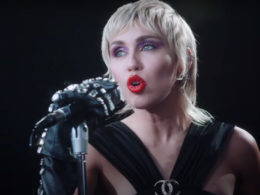 Her upcoming “She Is Miley Cyrus” album will also precede her 2019 EP, She Is Coming.
byBien Luigi

Usain Bolt was pictured kissing a mysterious woman in a club before returning to the Olympic village with Jady Duarte, widow of a notorious drug lord. Bolt's girlfriend, Jamaican model Kasi Bennett did not travel to Rio with the gold medalist.
byMelony Hill

The DMV’s own Vinnie Boi has a question for you: Are you pleased with the person that you…
byAshly E. Smith