The issue of WWII ‘Comfort Women’ has been a delicate and intense problem between Japan and South Korea ever since the war ended. In the past, Japan has repeatedly only acknowledged a fraction of the number of women or outright denied the existence of the Korean women who were forced into sexual slavery during the war. Despite the alliance and trade between the two countries, the issue of the Korean comfort women has always been a huge source of friction for Japan and South Korea.

During WWII, Japan forced thousands of women from Korea and other Asian countries into prostitution. The women were forced to live in brothels and readily provide sex to Japanese soldiers at any time. Today there are 46 former sex slaves in South Korea.

As part of the deal between Japan and South Korea, Japanese Prime Minister Shinzo Abe publicly apologized for Japan’s actions during WWII and authorized a 1 billion yen ($8.3 million) aid fund to go to the elderly women still alive from those who were forced into sexual slavery during that time period.

“Prime Minister Abe, as the prime minister of Japan, once again expresses his feeling of heartfelt apology and remorse to all those who, as ‘comfort women’, experienced much suffering and incurred incurable psychological and physical wounds,” Fumio Kishida, a member of Japan’s House of Representatives and the Japanese Foreign Minister, said after the meeting with South Korea.

The apology and fund are a very important step towards distilling the intense animosity between South Korea and Japan. 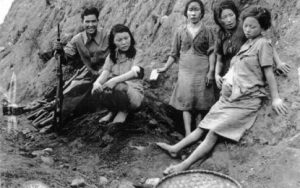 This is not the first time Japan has apologized for its actions in WWII. As part of the 1965 peace treaty, Japan gave $800 million in economic aid and loans to Seoul. Part of Japan’s refusal to apologize and pay South Korea’s comfort women was the fact that they had already given money to Seoul as part of the treaty.

However, South Korea and critics of the treaty argue that none of that money went directly to the women but instead only went to the newly established South Korean government. The fact that the comfort women were not directly acknowledged along with Japan’s denial over the years had caused a lot of tension between the neighboring countries.

While this is an important step for Japan and South Korea, only time will tell if this deal can finally begin to mend things between the two countries once and for all.

15 Secrets Firefighters Will Never Tell You

D. Woods drops a single from her latest mixtape Lady in the Street.
byBrennen Jones