Kevin Durant Makes His ‘Decision’ and Picks the Warriors

Kevin Durant, the most prized free agent of this year’s class, has made his decision and he’s taking his talents to the Golden State Warriors.

Kevin Durant has finally made his decision.

He’s taken a page out of the LeBron James handbook of chasing rings and he’s taking his talents to the west coast and joining Steph, Klay, and Green on the Golden State Warriors to form perhaps the greatest team ever assembled…on paper.

The Oklahoma City Thunder free agent made his announcement on The Players Tribune that he will join the defending Western Conference champions.

Golden State, Boston, Miami, San Antonio and the Los Angeles Clippers met with Durant and his inner circle on Friday, Saturday and Sunday in the Hamptons on Long Island in New York.

Durant was the considered the top free agent on the market and now joins a team that is coming off back-to-back NBA Finals and a 73-win regular season.

Durant joining forces with a team such as the Warriors after coming so close to beating them after having them down 3-1 in the Western Conference Finals, most certainly will leave a bad taste in Thunder fans across the nation.  But this is the landscape that we have created when we’re always comparing legends to players still playing, trying to create their own legacies and the weight of it all leads to players like LeBron and Durant leaving their teams to chase and hopefully get that ring.

Yes, the Golden State Warriors seem like the undisputed favorites to win it all next season but we all know how last year’s 73-9 team fared in the finals, so there are games still left to be played of course, and nothing in the NBA or the world of professional sports is ever a done deal.

Pixar Says It Doesn’t Have Any Sequels Planned Beyond 2019

He was reportedly shot in the leg and chest when a “couple of people” who jumped out of bushes trying to rob him.
byBien Luigi 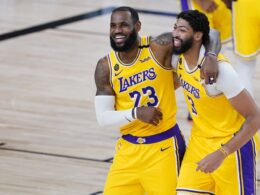 This is actually a very fitting description for how James has traditionally interacted with fellow star teammates.
byBien Luigi