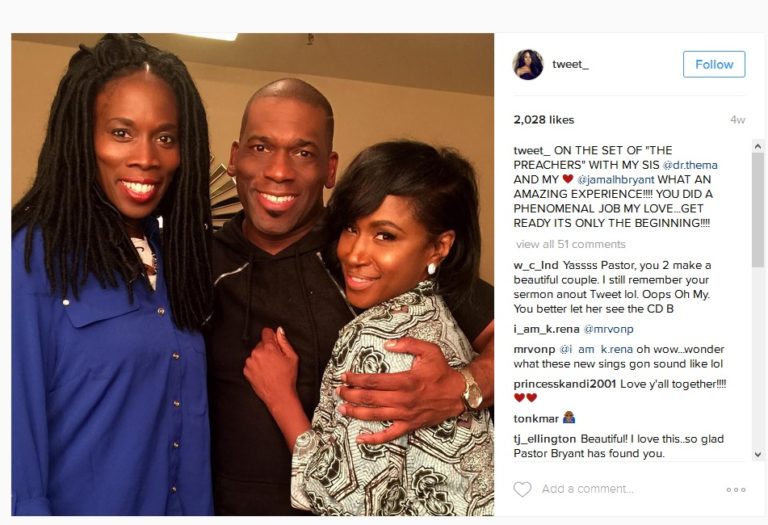 Apparently the two have been dating for nearly a year after a chance meeting in Times Square when the pastor asked what he calls his “favorite singer” for a photo. I’ve been so caught up in real news that I didn’t even notice the two had both “come out” with their relationships  weeks ago on television talk shows.

Bryant introduced Tweet, real name Charlene Keys, on his show “The Preachers” July 29th. Tweet announced the couple’s relationship on Centric’s “Being” “We’ve grown into an incredible friendship,” said Bryant of his lady love. “I call her my last lady.”

Though their relationship may come as a shock to many of us it may not come as a shock to those close to Keys. Earlier this year in an interview the singer talked about how she spent her time out of the spotlight. “I had to get my life together spiritually. It took a lot to compromise [on the last album]. It hurt a lot to not have nobody speak up for me. I was in a relationship and the guy had a baby on me. Everything was hitting the fan at the same time. I remember watching BET and Tonex [now known as B. Slade] was singing “Make Me Over.” … I was at my wits’ end. I was drinking every day, smoking three packs of cigarettes. It was like, come on, this can’t be life.” she said.

She went on to say “I took myself on a spiritual journey. My spiritual life is on point now. I wouldn’t be here today if I hadn’t made that choice to go back and rededicate myself. That’s when my blessings started coming — hit or miss, with different labels. It was all done to build me for this time. I didn’t take it personal. I knew to keep the faith. I couldn’t hit anymore rock bottom than I already did.”

Seems like she may have been on a path towards her destiny as a pastor’s wife…if this spiritual awakening came before the pastor entered her life. Let’s just watch this and see how it turns out. At least we know she’s well versed in the art of self pleasing because dating a pastor she can’t be getting any.

Oh wait, this is Pastor Jamal Bryant we’re talking about, the same preacher accused of having an illegitimate baby while still married and sleeping with members of his congregation. As the pastor admitted earlier this year, he too has flaws that he contends with, man of the cloth or not. “Over the last week, a lot has been said, a lot has been suggested and, like you, I was thrown into a tailspin. I had to shut down for a minute so that my response would not be that of a man but be priestly as a man of God,” the Baltimore pastor said. “To that end, let me say to you, I am one of those rare people who are flawed with character, that with all of my issues, I don’t run from them but I stand right next to them.”

Somehow I see a reality show coming, Tweet’s new album Charlene was released early this year. I’m sure this is  couple  that will give us  plenty to talk about.

Dr. Conrad Murray Guilty of Involuntary Manslaughter in the Death of Michael Jackson