Colin Kaepernick did not stand during the national anthem. The subsequent fallout has been incredibly informative with regard to faux white outrage. He isn’t the first black person to not stand for the anthem and more black celebs should follow suit. I don’t stand for the anthem. It isn’t for black people. It never has been.

This is the verse that’s pertinent to Black Americans:

“And where is that band who so vauntingly swore,
That the havoc of war and the battle’s confusion
A home and a Country should leave us no more?
Their blood has wash’d out their foul footstep’s pollution.
No refuge could save the hireling and slave
From the terror of flight or the gloom of the grave,
And the star-spangled banner in triumph doth wave
O’er the land of the free and the home of the brave.”

When has life, liberty or the pursuit of happiness been attainable for us? Even back then, we weren’t exempt from fleeing for our lives or facing certain death. 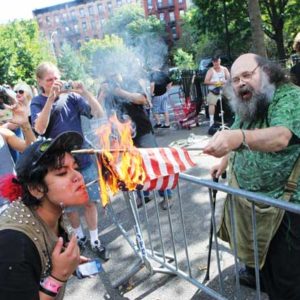 Equality, justice and respect are elusive “privileges” that have never lent themselves to black bodies. The white citizens of this country are continuously ignoring the numerous years of brutality, murder, rape and demonization that we’ve faced for centuries.

All in the name of a song. Even meaningless words have greater value than black folks’ lives. Closeted and open racists display white outrage with no observance of vigilance for their “fellow countrymen”. Their anger repudiates any conscionable change that could take place because outrage only matters when there’s a white voice of dissonance attached to it.

White outrage is only meant for symbols that are now useless relics in the tapestry of American history.

We aren’t afforded the luxury of protection by your shitty flag and rhythmless anthem. Our veterans come home in boxes, when they are killed in active duty, covered by a flag that has never represented them. Black vets who fight and have fought for this country will still be shot and killed by trigger happy pigs who were “threatened” by them.

So, no! We will not stand for your anthem or pledge allegiance to your flag. We have our own and they’ve NEVER forsaken us.

Power To The People.

Netflix Has Announced That Will Smith Will Host A Comedy Special

Why Not You Academy Is Founded By Russell And Ciara Wilson

Matthew McConaughey Isn’t Interested In Running For Governor Of Texas, According To Ted Cruz

Bradley Beal Will Participate In The Summer Olympics For Team USA

Bee A Fantographer for Applebee's and Earn Free E-Gift Cards