I Fancied a Girl, Does That Make Me Bi?

Does it make me Bi for falling for a woman I thought was a guy?

It was like any other Friday night. I was drunk, okay I was smashed. I was at my favorite club with my friends and I was having the time of my life. Enter the cute boy in a leather jacket and the night was already off to a great start.

He offered me a drink, I happily accepted, it was pretty loud, I could barely hear a word he said and after communicating through hand signals we managed to get some drinks and progress to the dance floor.

I was having a great time, good company, good music, good drinks. I was in my element, plus this guy was pretty cute. I certainly liked him and he seemed to like me too. As the night went on we danced, he bought more rounds of drinks and we made out at the bar causing my friends to tease in outrage at our PDA.

Everything was going great, it was turning out to be the best night out in a very long time. Then I needed to pee.

I froze a little. These were the horror tales your mother warns you about. I was about to be abducted or kidnapped. I knew this guy was too good to be true. And he was because he wasn’t a guy. He was a girl.

Outside of the musky smoky club, her boyish dress sense, buzz cut, and sexy leather jacket didn’t scream mysterious bad boy. They screamed typical lesbian and I’d been too drunk to realize.

She added me on Facebook the next day, how she found me I’ll never know. There staring back at me was the realization that I was smitten with a girl the entire evening. Me, the most straight girl you’ll ever meet who wouldn’t even kiss a girl in a dare game had been grinding up against a fellow female all evening. What exactly had I been trying to grind on when there was nothing there to grind on.

My friends were speechless. They hadn’t realized either and like the great pals that they were couldn’t stop laughing and thought the entire situation was hilarious. But it got me thinking.

I was attracted to this person. I was very attracted to them. To say I fancied them was an understatement. So what did this mean? Was I gay? Was I a lesbian? It didn’t make sense. I still found boys attractive. So was I bi?

I thought about it for a long time. It made me nervous, this could possibly change my life. Me the girl who always thought she was straight. Maybe I wasn’t? Except I was.

I realized I found this stranger so attractive because they possessed all the features that I usually find attractive. Dark hair, dark eyes, short hair, attitude and a stance of authority. I realized finding her attractive had absolutely nothing to do with her gender or her genitals and everything to do with my “type” that typically falls into the male category.

How could I be a lesbian if the girl I was attracted to, I thought was a boy? Surely that just confirms I’m physically attracted to boys?

I asked a lot of people to reassure myself, people laughed at the sorry and made jokes, but it was important to me, maybe I didn’t know myself at all, maybe I was confused. I needed answers. I realized it didn’t matter what gender someone is, if you find them attractive you find them attractive, as for me, I am 100% positive I am straight and that experience just confirmed it for me. 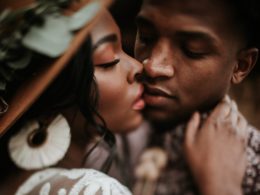 5 Tips for Men Who Actually Want to Please Their Woman

If you're a woman who's interested in making more out of her sexual experiences or you're a man who's looking to boost intimacy in the bedroom, this article is for you.
byTUT Staff

After ‘I Do’: A Closer Look at American Marriage

It's what occurs after the wedding that really defines marriage.
byBrenda Mick

9 Smooth Ways to Ask Someone Out on a First Date

Does the idea of asking someone out pushes you into a state of complete frenzy?
byTUT Staff

The Perfect Age to Get Married! What Is It?