The letter started with a false compliment and then sped off into a racial tirade full of words like “Jigaboo” an “Ni*ger” and was laced with threats.

It’s America, 2016 and are living in a society that has not been so divided since the Civil Rights Movement of the 1960’s. Reading and watching the news these days, some of the stories would lead you to believe we’ve been knocked backwards in time. Racial epithets scrawled on people’s homes and cars, racist letters being sent through the mail and passed out in small communities. There was a time when even though the Blackness of their skin was hated, celebrities got a pass from the worst of racism. While Blacks have over time been considered inferior by our white counterparts, they have always loved to be entertained by us. Brandon Marshall of the Denver Broncos found out the hard way that love affair is surely over.

Let’s not pretend that there is not a group that prefers their “Negros” shucking, jiving, throwing a ball, or gyrating on stage versus taking about their rights and social issues. Colin Kirkpatrick’s openly defiant stance of taking a knee during the National Anthem him sparked a movement followed by many athletes from football to basketball. The backlash has been tremendous. 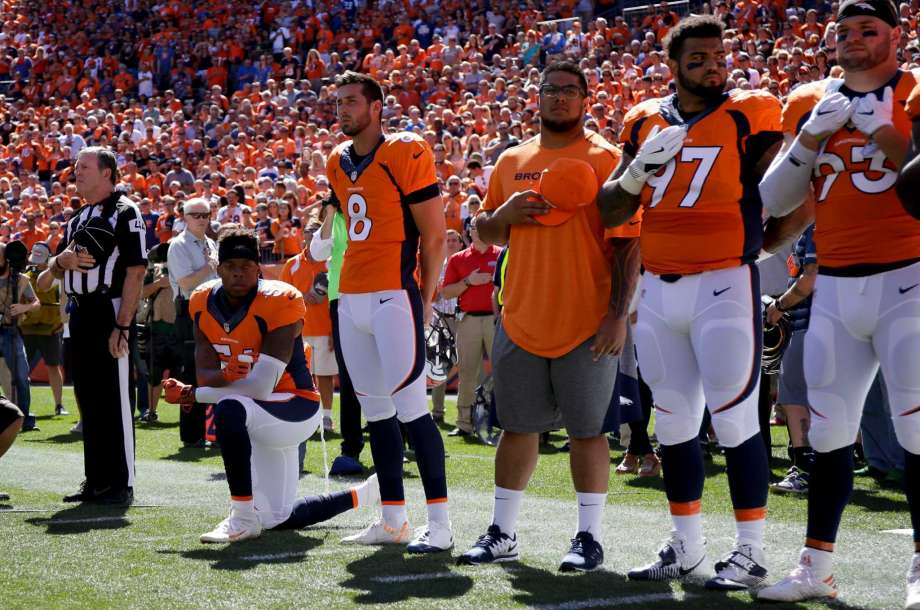 In June of this year signed a new contract with the Denver Bronco for $32 million. In September, Marshall joined the protest started by Colin Kirkpatrick and took a knee during the national anthem. He took a knee for eight consecutive games. In November, he announced he would stand for the remainder of the season. As a result, Air Academy Federal Credit Union dropped Marshall from an advertising contract. 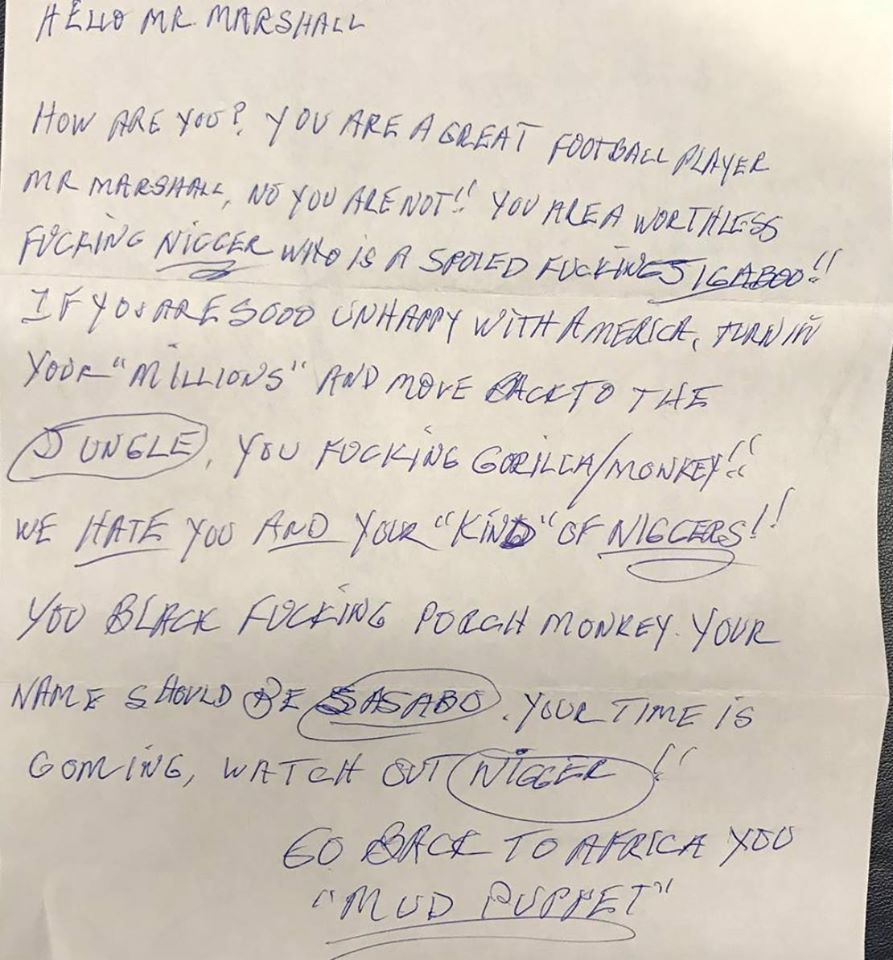 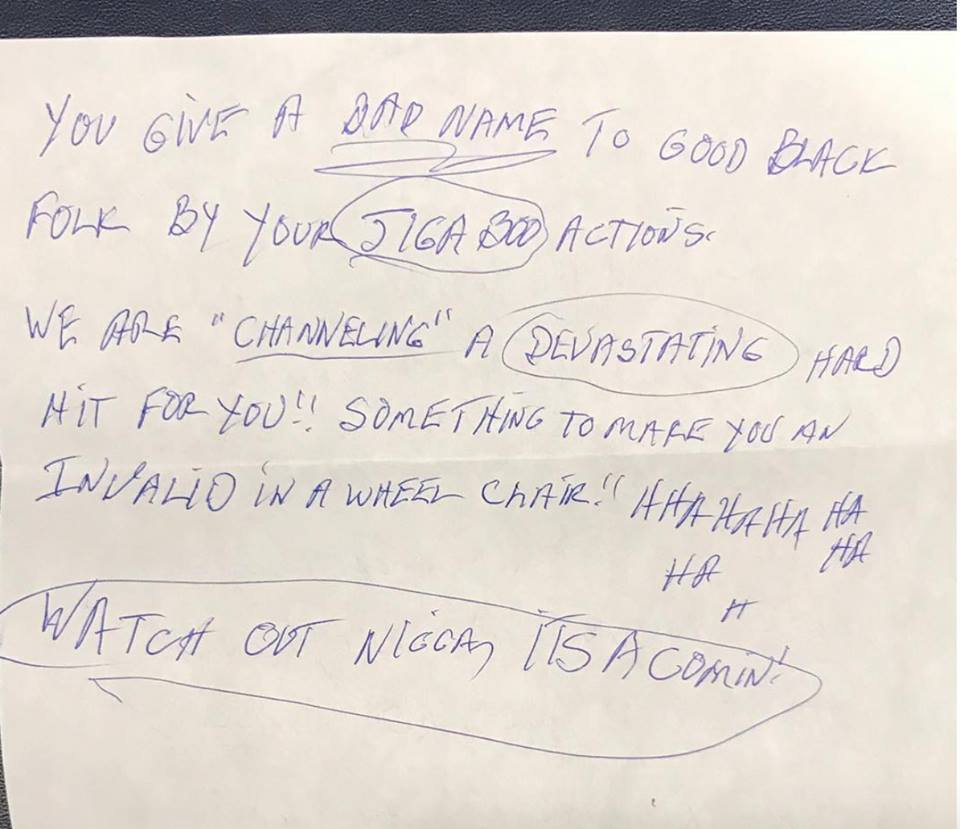 On December 8, Marshall was shocked to receive a letter postmarked from Mrs. Jackson’s sixth-grade class at Martin Luther King Middle School. On the outside of the envelope was written “We love you Mr. Marshall”, what Brandon Marshall found inside had absolutely nothing to do with love. The letter started with a false compliment and then sped off into a racial tirade full of words like “Jigaboo” an “Nigger” and was laced with threats.

While the letter says it was delivered from Mrs. Jackson’s sixth-grade class I’d be willing to be money that it was written by a white male over the age of 50. Even the most ignorant racist doesn’t use the word “jigaboo” in 2016.

Marshall is concerned about the letter but not intimidated by it. He turned the letter over to the Bronco’s security team. “It’s not going to spook me. It’s not going to make me move any different than I’ve moved. It’s definitely eye-opening,” Brandon Marshall has said.

Marshall also posted the letter to his Instagram saying “”he hatred by some against people of color is one of the reasons we are where we’re at in the world today, and they wonder why we feel the way we do and take the stances that we take. I received this letter at work.” Some have questioned why he chose to share the letter, but Marshall feels that awareness is necessary. “I just wanted to show that … to expose that racism still does exist,” Marshall said. “A lot of people think, ‘Oh, it’s over; it’s not out there,’ but it really is.

Why are white racists in America so hell bent on telling Black men and women who were born in the United States to “go back to Africa”? We’ve never been to Africa, we didn’t choose to be born here anymore than any other person or race born in America. Where you’re born is a simple matter of where your parents live or perhaps travel too close to mom’s due date.

This idea that we are living in two Americas, one where we all have equal rights, opportunities, and protection and another that mirrors a time before the Civil Rights Movement is heartbreaking. I am raising a teenage son and today I fear for his life in a way that my mother never had to fear for mine. I grew up in a time where Black culture and people thrived. Oh, what it was like to grow up in the 90’s. Today, I worry every time my son leaves my presence, I don’t know who I fear more; the police, the inner city thugs, or the white supremacists who have had their confidence bolstered by the likes of Donald Trump and his base of voters.

Marshall turned the letter over to the Denver Broncos security team who is taking the letter seriously and looking into it. He has not contacted police. I don’t know why not, the person who wrote this letter threatens a “devastating hard hit” and taunts that Marshall should prepare for life in a wheelchair.

If you think the letter was concerning enough, New York Giants Fullback, Nikita Whitlock says his home was broken into and vandalized this weekend. The vandals left swastikas and the words “KKK” and “Trump” scrawled across the walls.

Is anyone safe anymore?