Openly gay student’s speech, referencing school shooting survivors, had to deliver his speech through a megaphone after it was rejected by Catholic school he just graduated from.

Valedictorian Christian Bales, a student at Holy Cross High School, took a megaphone in hand and delivered his speech on the lawn following graduation. School officials determined just hours before the event that his speech (already approved by the school) was “political and inconsistent with the teachings of the Catholic church.”

The Crestview Hills, Kentucky, valedictorian was shocked when the call came in advising that the speeches crafted by himself and student council president Katherine Frantz had been reconsidered during an emergency session. In an interview with local station WCPO, Bales noted that during the call he was informed the speeches were “too confrontational, too angry, too personal” and “they weren’t appropriate for the setting.”

The controversial elements appear to be references to the Stoneman Douglas school shooting survivors. The speech included the phrase “the young people will win,” a rallying cry for safety reform following the tragic incident.

The speech hearkened back to the many calls for systemic change and inclusion that have been made by students and educators for years without much success. It also brought echoes of an incident last year where the yearbook entries of two gay students were censored because of their apparent calls for social reform.

Bales’ mother believes other factors may also be part why the star pupil was censored by the Catholic high school. In a call from the principal during the events leading up to graduation, she was asked to ensure that Bales would not wear bobby pins or makeup to the event.

The valedictorian is an openly gay student and he and Frantz have both spoken openly in support of inclusion and equal rights at the school. Bales identifies as “gender non-conforming.”

Education professionals around the world have begun to rally behind inclusion and diversity in the classroom. Kate Jordan-Downs, KinderCare Education’s Director of Inclusion notes how important it is that “experiences are rooted in an opportunity to learn about differences in a positive way.”

The closing of the speech went thus: “We must take what we’ve learned in this community and apply it to the world we are about to encounter. We are the young people, and we will continue to win.”

Author
Bradley Robbins
Bradley Robbins is a tech, trade and travel writer with a lifetime of experience with North America, Europe and Japan. With over a decade of experience as a copywriter and blogger, "Scratchpad Brad" is back in the writing game after too many years in a cubicle slaving away as an overnight crisis expert.
Previous Article 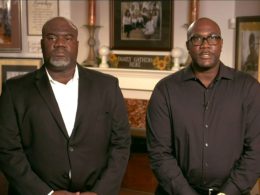 He called on Americans to seek justice and get themselves into “good trouble,” a phrase coined by the late civil rights activist and Rep. John Lewis.
byBien Luigi

President Donald Trump’s company started selling a new line of Trump-branded merchandise this month and some of the products are manufactured overseas.
byBrennen Jones

Dr. Martin Luther King And Sojourner Truth Are On The New $5 And $10 Bills. It’s Bigger Than Harriet Tubman.

Dr. Martin Luther King, Jr., Opera Singer Marian Anderson and former First Lady Elanor Roosevelt will appear on the back of the $5 bill. The back of the $10 bill will feature Sojourner Truth, Susan B. Anthony, Lucretia Mott, Alice Paul and Elizabeth Cady Stanton.
byMelony Hill