On the rise: Kamryn Marie

With her new album As Is, Kamryn Marie is poised to conquer the music scene. Anchored by its three singles, “Standing In The Way,” “Together” & “Second Best,” the pop-rock infused album was released on May 18 and has since gained much acclaim.

Today, she speaks candidly about her album, the highs, and lows of her career, as well as her hopes for the future. Now, without further ado, here’s Kamryn Marie!

AS: Greetings Kamryn! Nice to meet you! Thanks for taking the time to chat with me today!KM:

KM: Thank you so much for the opportunity to speak with you.

AS: No problem at all! Where are you from originally?

KM: So I was born in Arizona, where I was adopted by my parents when I was 2 weeks old. I was lucky enough to live a life full of love, education, music, and happiness in my old hometown, Washington, DC. I moved out to the Westminster, MD area when I was 19 and pursued my education and music while out here. I am looking forward to moving to Tennessee next year.

AS: Wow! Sounds exciting! What was your childhood dream before pursuing a career in music?

KM: Honestly, I had so many that I can’t pick a specific one. At one point I wanted to be a special education teacher. I then considered working as a forensic investigator, and actually obtained my bachelors in Criminal Justice specializing in forensics, but that was not my true passion. With a family full of medical doctors and nurses, I tried to stay away from the medical field, but that failed. I am currently in graduate school getting my masters in public health so that I can do medical research while still continuing my music journey.

AS: That’s amazing! There’s nothing wrong with being a woman who wears many hats. Some of your biggest influences include Cassadee Pope and Kacey Musgraves. How did they inspire you?

KM: After a really intense break-up, Cassadee Pope’s song “Wasting all These Tears” helped me to cry out the pain and move on, and she can belt out some serious notes, haha. Kacey Musgraves has this unique, soft, intricate voice that I adore. Her songs are always so relaxing when I need a chill pill. 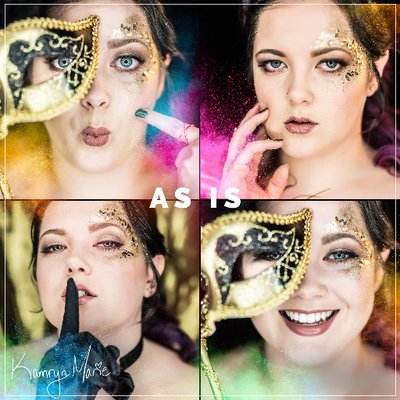 AS: I can certainly understand that! What was your creative process when crafting As If?

KM: As If is filled with original songs about my life. I love writing about my experiences because I know I am not the only one that has gone through them. My goal is to reach my fans in a way that they have never experienced before, in a personal, intimate way, so that they know that they are not alone and that their feelings are valid.

AS: As a writer, I respect that. It’s always good to let your fans feel as if you understand them in ways that others don’t. One of my favorite songs on the album is “Gotta Try”. I like it because although the song speaks of loving again, the lyrics can also be applied to coping with life’s countless ups and downs. Which song is your favorite and why?

KM: “Gotta Try” was one of the few songs that I wrote while in tears. All of my music speaks heavily to me and brings up so many emotions. I would have to say that my favorite song on the album is “Together” because it was written about the person that got me through my darkest days. It was written out of hope and energy, bringing forward the desire to fill my life with positivity. I listen to it whenever I need a positive boost in my life.

AS: Which song on the album would say is your most autobiographical?

KM: All of my songs are about my personal experiences, but there are two songs that stick out to me. “Panic Attack” and “Pull Me Up” were both written during a very dark time in my life. “Panic Attack” was written just prior to a panic attack to explain to those that don’t understand them just how miserable you can feel during one. The bridge shows how many different thoughts can run through your mind at once. “Pull Me Up” was written when I was in a downward spiral. I want to explain to everyone that depression is real and those that have it suffer every day, sometimes in silence. I want other artists, and even just those listening, to realize that it is ok to express your emotions and that not everyone has to write music about happiness. I prefer my music to be written from the soul and full of raw emotion.

AS: You have made some valid points! Describe yourself in 5 words

KM: Ooh, this is a tough one! If I have to pick, I would say caring, goal-oriented, grateful, unique, and brave.

AS: Yours sound a bit like mine! What can you do today that you could not do a year ago?

KM: Being in graduate school is a huge accomplishment, in my opinion. I was never great at school, but to get here just blows my mind. I also never thought, back in December of 2016 when I started in the studio, that I would have an album out. When I first started at the studio, my goal was to get my feelings out in music, but not release anything. Sure enough, a little push from my producer and here I am, haha. I would not change it for the world.

AS: Kudos Kamryn! Accomplishing things when you once doubted yourself is an indescribable feeling! What do you want most out of life?

KM: Happiness and love are the two most important things to me, and I currently have both, which makes me the richest girl in the world! I also am still able to create music which is the cherry on top.

AS: That’s great! If you had the chance to go back in time and change one thing, what would it be?

KM: I would have started in the studio a lot sooner. This musical journey has been an eye-opener and an incredible experience for me.

AS: What stands between you and happiness?

KM: Nothing! I am always bettering myself, which is the key to my happiness. I also have the one I love standing by my side helping me achieve what I desire which helps immensely.

AS: Wonderful! What is your greatest strength and weakness?

KM: I will start with my weakness because it leads into my strength. Anytime I go to an animal shelter, I always head for the senior and geriatric animals. I will always ask who is the oldest and adopt that one. I have a major soft spot for old animals because I can’t stand thinking that they will die alone in a shelter. As for my strength, I did not know it was a strength until many people told me, but I also do hospice for animals as often as I can, meaning if they are about to die and need a loving home for their last few hours, days, or weeks, I will provide that. This allows them to die in loving arms and not alone. I just love doing it and it makes me feel like I’m worth something. AS:

AS: Wow! That is extremely noble. I too have a soft spot for all animals, so I understand. If your life was a movie, what would be the title?

KM: I have truly never been asked this question, haha. Uhm, I guess “The Great Roller Coaster”. My life is full of ups and downs, but with a loving person by your side, it is a lot less scary.

AS: Haha! I love it! What does success mean to you?

KM: While the term may literally mean “not failing”, to me it means taking one step forward from your comfort zone. It also means getting up in the morning, eating something, showering, and getting dressed. Simple things like that can be incredibly difficult for some people, so I want them to know that the small things count as successes and to not give up.

AS: I feel that. What did life teach you yesterday?

KM: Yesterday was spent in the studio working on a new song. Every time we start a new song, it sparks excitement and desire to hear what it will end up like. I learned that something as simple as words on paper can be turned into masterpieces. I am so lucky to have the team that I have. Their encouragement, talent, and motivation have helped me to achieve so much.

AS: What messages are you hoping to convey through your music?

KM: Anything is possible. I have had someone contact me personally saying that one of my songs touched them so deeply that they broke out in tears because they thought they were the only one experiencing it. THAT right there is why I make music. THAT is my goal.

AS: Beautiful! Do you have any upcoming projects and events?

KM: My newest single “Party Like Bob Marley” releases August 3rd, followed by its music video releasing August 10th. I am also back in the studio working on more, so there is no sign of me stopping any time soon.

AS: I hear that! What advice what you give other upcoming artists?

KM: Write from your heart. It is easy to write love songs or break up songs, but we need more of the raw stuff that no one wants to talk about. Get creative and enjoy every minute of the experience.

AS: Let the fans know where to reach you.

AS: Great! Well Kamryn, I’m sure that we’ll be seeing a lot more of you! Keep up the great work!