Tammy Fox, a Pennsylvania mother of 5, was killed in a car crash after her boyfriend cut her brake lines for a makeshift crack pipe.

Tammy Fox, a Pennsylvania mother of 5, was killed in a car crash after her boyfriend cut her brake lines for a makeshift crack pipe. Police say Fox, 38, drove through an interstate before crashing into a tree.

An investigation revealed that her brake lines had been cut, leading police to talk to Fox’s boyfriend, John William Jenkins, 39. Law enforcement says Jenkins “admitted that on the evening prior to the crash he cut the victim’s brake lines while at their residence in an attempt to obtain a metal pipe that could be used to smoke crack cocaine.” Jenkins added that Fox was pressuring him to find something to smoke out of and he didn’t want to go to the store, so he started “hacking away” underneath Fox’s vehicle.

Jenkins is currently being held in Luzerne County Jail on a charge of criminal homicide and is scheduled to be in court for a preliminary hearing on Sept. 7.

This father and son duo apparently loves chicken a little too much.
byBrennen Jones 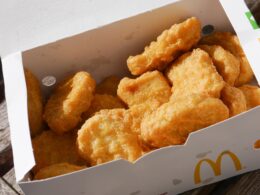 She argued that since she was never told about the children’s diet and said she was not afraid to go to court because her father is a lawyer.
byBien Luigi

A Scarsdale woman grew and sold $3 million worth of pot.
byJohn Bean