Killer Of #BlackLivesMatter Activist Oluwatoyin Salau Confess To The Murder

Court documents also reveal that Oluwatoyin and Victoria Sims, 75, apparently met each for the first time just days before they were killed by Glee—including Glee arranging for Sims to pick both of them up at a local bus stop.

The main suspect in the case has finally confessed days after Black Lives Matter activist Oluwatoyin Salau was found dead in Tallahassee, Florida.

According to recently publicized court documents Aaron Glee officially confessed to murdering Oluwatoyin, as well as another woman.

Oluwatoyin Salau, the 19-year-old was recently found dead in Tallahassee, Florida had local media outlets provide an update to the heartbreaking murder of activist. Suspect Aaron Glee, 49, admitted multiple times to the kidnapping and killing of both Oluwatoyin and Victoria Sims, a volunteer and retired state worker. Glee waived his right to remain silent and told local officers from the Tallahassee Police Department and the Orlando Police Department what happened.

Among the details in his gruesome confession, include revealing that he kept Oluwatoyin prisoner in his dilapidated home located on Monday Road for several days, as he continued to repeatedly rape her. He eventually said he decided to kill her to avoid getting caught by authorities. Glee said he kept her tied up in his home for three to five days, but lost track of time because “he was heavily under the influence of alcohol.” Additionally, Glee said he released her at times to eat and bathe—while “sexually assaulting her numerous times during those three to five days.” He then tied her up in a way in which he thought would cause her to die and left her in a bedroom.

“Glee explained how over the course of several hours he would re-enter the bedroom multiple times to see if [she] was still alive,” the report says. “Ultimately, he entered into the bedroom and determined [she] was deceased.”

Court documents also reveal that Oluwatoyin and Victoria Sims, 75, apparently met each for the first time just days before they were killed by Glee—including Glee arranging for Sims to pick both of them up at a local bus stop.

If you’re from Pittsburgh, especially in the entrepreneurial scene you’d be hard-pressed to find someone who doesn’t know Vernard Alexander.
byBrandon Brooks

Come see how the Duquesne City Library has more to offer than books!
byChristina Jeter 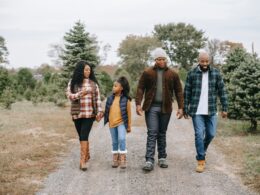 Ways to Exercise as a Family During the Pandemic

The COVID-19 pandemic has changed almost everyone’s lives in some way, including how we exercise. One thing that…
byNoah Rue