Growing older is something that many of continue to be apprehensive about. Although we understand that it is…

Growing older is something that many of continue to be apprehensive about. Although we understand that it is inevitable, we can help but wonder if the best years of our lives have passed us by. This way of thinking can quickly be combated if we just choose to stay young. These are exactly the sentiments of UK-based DJ/Producer Liam Keegan and synth-pop artist, Burwell, who aim to remind us that growing up is simply optional. Enter their new single, “Forever Young”.  With it’s upbeat tempo delicately infused with Burwell’s silky vocals, this summer ditty gives a whole new meaning to feel good music.

Inspired by the euphoric carefree spirit one might find running free in an amusement park, “Forever Young” is an anthem for the child inside of  all of us, and expresses the importance of keeping it alive. Released on July 3, 2020, Keegan’s upbeat dance-pop single and accompanying music video aims to expose the real secret to being an adult, which they believe to be making things up as we go along. “I was 29 when I realized nobody knows what they’re doing,” laughs Keegan. “Lack of fear is what keeps me young. It’s borderline stupidity.”

At the age of 15, Keegan discovered the iconic artform of DJing at a house party. Soonafter, he began DJing in college, which set the stage for both his music and production skills. Ultimately, they both became his full-time gig for over 10 years. Over the past decade, he has worked with the top four major labels (Universal, EMI, Warner and Sony) and commissioned to work with artists including Carly Rae Jespen, Sia, Selena Gomez, Britney Spears, Justin Bieber, Usher, Katy Perry and Lizzo among others. Notably, Keegan’s mix for Jepsen was the 17th track of her album release in Japan that sold over 100K copies, and his tracks have generated millions of streams on both Spotify and radio.

Reflecting on his childhood enjoyment of comic books, video games, and action-figure T-shirts, Keegan’s admits that he has hardly changed. “I know when I’m an old man, I’ll still be young at heart”, he says. I’ll grow up, but I refuse to grow old.”  Want to join Keegan and Burwell in maintaining your youthful spirit? Follow them on all social media platforms below.

Beyoncé references throughout the single the beauty of Black resilience including during the current racially tense climate that has resulted from instances of police-involved deaths.
byBien Luigi

Drake Concert in New York City Canceled Due To Violence

Young Money artist Drake, who released his debut album “Thank Me Later” on Tuesday, was scheduled to perform…
byKadeem Lundy

Kendrick Lamar To Drop A New Album Before End Of this Year?

As the world waits for Kendrick Lamar's upcoming album, he gives his fans hope as he mentions how he's trying to put out the untitled album by the end of the year.
byPascal Mnyika 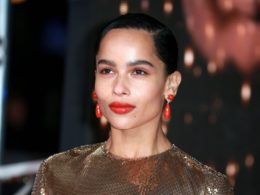 It’s all very heartwarming, but it’s more than that: Now that Zoe is a member of the DCEU, that means she’s colleagues with her stepdad, who’s the franchise’s resident live-action Aquaman.
byBien Luigi