Apple CEO Tim Cook and CFO Peter Oppenheimer are scheduled to today have a conference call with investors and many analysts predict that the company may offer a dividend to shareholders after almost 18 years of not paying dividends.

UPDATE: Apple CEO Tim Cook announced the company would be awarding shareholders a quarterly dividend of $2.65 per share. This will dip into the $100 billion war chest the company currently has and signifies a departure from how Apple co-founder the late Steve Jobs run the company. CEO Tim Cook’s moves will be closely watched here on out as he seeks to stamp his own legacy on the most valuable company in the world.

Apple CEO Tim Cook and CFO Peter Oppenheimer are scheduled to today have a conference call with investors and many analysts predict that the company may offer a dividend to shareholders after almost 18 years of not paying dividends. These sentiments are informed by statements Tim Cook made earlier on in the year when he said that the cash Apple holds is much more than is needed to run the company.

Apple currently has close to $100 billion in cash that it holds both in the US as well as overseas and is expected to generate a further $75 billion in revenues this year alone. The company last issued a dividend in 1995 while the late Steve Jobs was out of the company after the ouster that exited him. The company however was caught up in dwindling computer sales and an increasingly hostile competitive market and on Steve Job’s return, all dividends were halted and shareholders have not received any since then.

The company has nevertheless restored its market domination with its three game-changing products the iPod, iPhone and iPad, which have all been phenomenal successes. The late Steve Jobs was known for his anti-philanthropic stance and many people saw his stance as one that put Apple, as an entity, above its shareholders and employees.

It will be remembered that he halted charity gifts during his tenure while increasingly tightening employee benefits. New CEO Tim Cook has turned this around by softening Apple’s charity stance as well as increasing perks to Apple employees. The company is expected to offer at least $2 per share quarterly earnings dividends or around $14 per share annualized dividend earnings.

There’s a new Google Chrome extension by the name of the Trump Filter, and its creator said its purpose is to blocks all references to the Republican presidential candidate while you browse the Internet.
byAmy Wesley 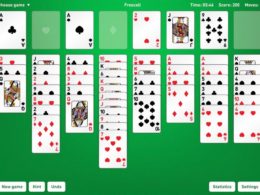 With so much time on our hands these days thanks to Covid-19, playing online games is making a big comeback.
byTUT Staff

Social gaming giant Zynga has today announced changes to how it does business that could prove more detrimental than useful to bosom bud Facebook.
byDaniel Mbure