George Lucas could be having second thoughts about handing his “kids” to the “House of Mouse.” Why did he actually pick this moment to let the dirty laundry out?

Star Wars: The Force Awakens has broken almost every record that a film can break for just two short weeks at the box office, and this seems to have left its former owner George Lucas crying foul. What has Lucas up in arms? Could it be he feels seller’s remorse over letting his baby go for just $4 billion, or is he angered over the fact Disney opted not to use his story ideas? Regardless, in his latest interview on Charlie Rose, Lucas no doubts has regrets for letting Star Wars go.

The rumblings that George Lucas wasn’t happy about the direction The Force Awakens was going started in January 2015. In an interview with Cinema Blend, Lucas spoke candidly about how his ideas were not used for Episode VII.

The ones that I sold to Disney, they came up to the decision that they didn’t really want to do those. So they made up their own. So it’s not the ones that I originally wrote [on screen in Star Wars: The Force Awakens]

It might have seemed like an afterthought at the time, but obviously, Lucas was feeling a bit neglected. This begs the question of why he chose to express his certain disappointment, now?

The Force Awakens has reached every milestone quicker than any movie at this point. It was the fastest to both $1 billion and $2 billion. It had the largest weekend opening in cinema history. Even Lucas himself concedes that he “really liked” the movie if Kathleen Kennedy’s interview with The Hollywood Reporter is to be believed. So, why all of the crying?

There really is a couple of reasons Lucas could have ill will towards the ‘House of Mouse.’ Lucas was very vocal during the Original Trilogy and Prequel days about doing things his own way regardless of what the fans felt. In fact, his attitude put such a rift between fans that an online petition was started to try to prevent Lucas from making his own movies. The positive response from fans could be just jealousy.

The next reason has everything to do with spoilers so be warned. If you haven’t seen The Force Awakens, do not read beyond this point.

It is no secret that Harrison Ford thought that Han Solo should die in Return of the Jedi. Despite this, Lucas decided to tell the story the way he wanted which was his right at the time. The Force Awakens finally gives Han the send off that Ford had been asking for. There is a real possibility that Lucas could be irritated over this.

Despite the bemoaning of Lucas, he still is responsible for giving the world Star Wars, but one should hope him calling Disney “white slavers” was something he would regret. Feel free to let us know what you think about the George Lucas comments? Is he justified, or is George Lucas simply crying over spilt milk?

Author
Chad Mitchell
I'm a fairly well-rounded individual. When I am not with my family, I try to spend most of my spare time as far away from reality as I can. This explains why science fiction and fantasy are my favorite books, movies and television shows that I enjoy writing about. I dig comic books and sports (see well-rounded).
Previous Article

Megan Fox Is Knocked Up, Again!

Rumor has it that Jay-Z and Beyonce turned down $14,000,000 just to be able to release these pics to their fans for free...through Tumblr.
byLexus Wheeler 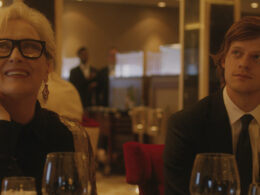 The trailer is filled with bon mots and promises of bickering, as well as supporting players Lucas Hedges and Gemma Chan.
byBien Luigi

Kanye West Doesn’t Pay the Extras in His Fashion Show?