Only Feminists Care When Boys Are Raped

How come only feminists care about male rape victims and the general community does not?

I was inspired to write this article today about boys due to a conversation I had with a Black female visitor who strolled onto my page.

In fact, she had just finished reading my other article about Nate Parker in which I spoke out against the Black community for their acceptance of rape culture in their defense of him.

She provided the typical deflective arguments that are usually brought up when women acknowledge rape culture, especially when the discussion is geared around women and girls.

Her primary concern was that “Men get lied on about rape”.

Then, she carried on to her second point which was that boys get raped too, and she even went as far as suggesting that I do not see that because it does not fit my lens.

I want to refute that if I may.

What I find particularly interesting about her point is that it seems that the sexual abuse of boys is only ever brought up by many of these people in order to derail a conversation that centers female rape victims.

However; here is the irony. On a regular day, the only people that seem to ever genuinely care about the sexual abuse of boys are women like myself, especially those who align with feminism or any movement that centers the liberation of women and girls. Yes, that is right. The same women you refer to as “man haters”, “radicals”, and “extremists” are the only people who highlight how rape culture affects boys. Why? Well, because we know that this is all a component of the patriarchy. Women like myself are actively against the way that patriarchy negatively affects several aspects of society. We are educated enough on the patriarchy to know that although the male gender benefits tremendously from the patriarchy, it also backfires for them in some ways.

Here are a few examples.

1) Men and boys are expected to uphold an emotionless state of being, which ultimately leads to toxic masculinity. Crying is frowned upon for men due to the patriarchy. This toxic masculinity translates in other ways that are considered “manly” by society, which are usually violent or verbally abusive.

2) Men and boys are often taught that sex is power and control. Because of this, they feel pressure to have sex early in order to confirm their manhood. This is why men and boys are shamed in some cases for still being “virgins”, as society likes to call it.

3) Men and boys are expected to always desire sex. While this may seem like a positive and liberating expectation to have for someone, especially for someone who actually does enjoy a lot of sex, it can be harmful in situations where boys are sexually preyed upon by adult women. The general reaction from the public would be that the boy had to have wanted sex because he is a boy. “What boy wouldn’t want sex from a hot woman?” would be their response. 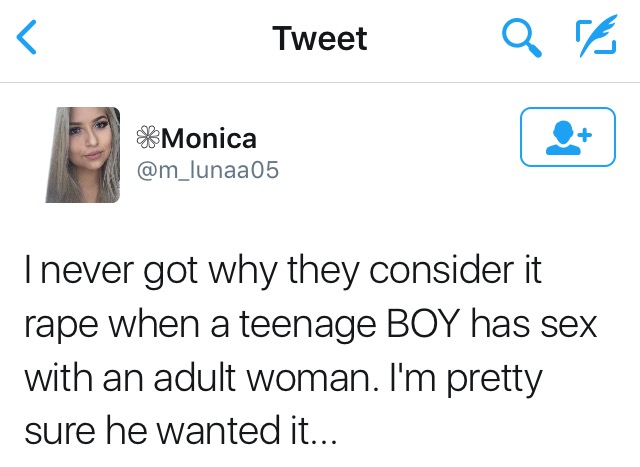 Many boys do not report their sexual abuse from adult women because they are conditioned to believe that sex with women should always be enjoyable and that consent from him is a given. Even if he did think or claim he wanted to have sex with the adult woman, it is her responsibility to not prey upon boys.

These boys do not report their sexual abuse from men because the homophobia and toxic masculinity in society makes boys feel that if they have been raped by men than their own sexual orientation may now be permanently invalid or their manhood has been diminished, so the experience is too embarrassing for them to report. 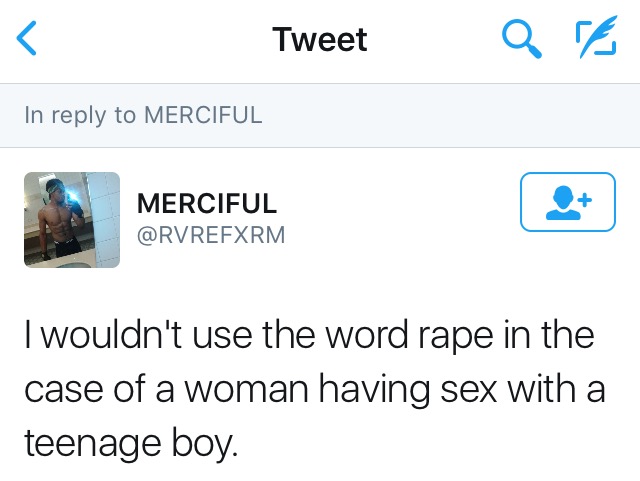 The people who use the sexual abuse of boys to derail conversations that center women and girls typically do not even make it a priority to speak about the under-reported rape cases of boys. It is simply a deflection technique that they use in order to silence the voices of women when we center female rape victims.

The subject of male rape victims is extremely important, and it is worth a conversation but it should never be used just to derail. I have asked plenty of these derailing people to start a thread about the points that they use to deflect, and they never follow through with it. That is proof that they are not truly concerned.

People insult feminists and other women-centered activists by saying that we hate boys when the reality is that we are just about the only ones who actually have these much-needed conversations for male rape victims. Meanwhile, everyone else is talking about how that little boy had to have loved being raped by his female teacher. 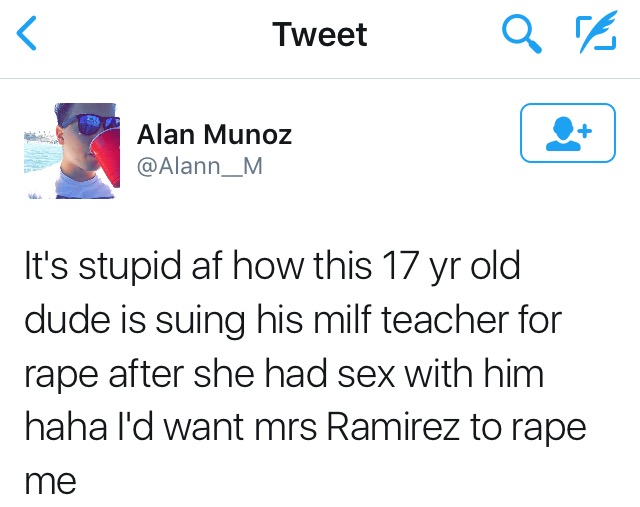 Spend less time unnecessarily criticizing active women like me, and start being a real voice against rape culture or you are a part of the problem.

Nate Parker Says He Will Not Apologize Over Rape Accusations