Protests take place outside of NFL headquarters to support Colin Kaepernick’s return to the game.

Fans protested outside of the NFL headquarters in New York City on Wednesday, August 23, demanding that Colin Kaepernick be able to play for a team this season. Any team.

The protesters believe that the star athlete is being blackballed for participating in a protest of his own while kneeling during the national anthem at the start of each game.

Derrick Johnson, NAACP interim president, and CEO, requested a meeting with NFL commissioner, Roger Goodell, as he believes it’s “no sheer coincidence” that Kaepernick hasn’t been picked up by a team this season. Johnson added, “No player should be victimized and discriminated against because of his exercise of free speech – to do so is in violation of his rights under the Constitution and the NFL’s own regulations.” 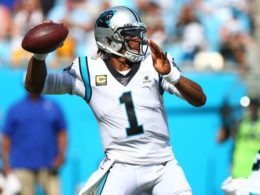 How Does Cam Newton Help Improve New England’s Chances to win the Superbowl, Without Tom Brady

Cam Newton has been a free agent for several months before the New England Patriots signed on the 31-year old quarterback which many see as an opportunity to resurrect his career.
byTUT Staff

Michael Bennett on Arrest: I Was Profiled, But Not All Police Are Bad

Super Bowl champion and Seahawks' defensive end Michael Bennett said he was assaulted and threatened at gunpoint by police during a chaotic incident in Las Vegas last month, and he now is exploring his legal options.
byTUT Staff

The letter started with a false compliment and then sped off into a racial tirade full of words like “Jigaboo” an “Ni*ger” and was laced with threats.
byMelony Hill

Lately, everyone has an opinion about the Ray Rice situation, and his wife doesn't appreciate it.
byPascal Mnyika